Visit msnbc.com for breaking news, world news, and news about the economy

Good Thing We Dumped That Body Right Away . . .

. . . before conducting an autopsy or giving journalists a chance to take independent photos or footage.

Because otherwise, Al Qaeda might have gotten upset at us.

Overwhelmed with work, I have not had time to blog an incredible revelation brought my attention by SPQR two days ago: ATF agents themselves allegedly purchased guns on their own and gave them to cartel members, and then lost track of them:

In a second, equally explosive disclosure, a law enforcement source tells Fox News, that ATF undercover agents were acting as the straw buyers and purchasing guns using government-issued false identifications and then providing those guns to cartel traffickers to gain credibility in their undercover roles. In that capacity, the ATF “provided 2, 50 cal. machine guns to traffickers that are loose in Mexico and unaccounted for,” the source said.

Yet, the ATF and the Department of Justice did not shut down the operation.

It was bad enough when it was merely alleged that ATF had allowed guns to be passed to cartel members. The idea that they were actually buying them and giving them to cartel members should be all over the front pages of every newspaper in the land.

Instead, it’s seven paragraphs down in a Fox News story.

Surely we will hear more about this.

And don’t call me Shirley.

Outrage of the Day: Taxpayer-Funded NPR Spends Your Money* to Hire Lobbying Firm to Help Them Get More of Your Money

Tell me if this doesn’t fill you with warm and fuzzy feelings:

National Public Radio (NPR) is paying the lobbying firm Bracy, Tucker, Brown & Valanzano to defend its taxpayer funding stream in Congress, according to lobbying disclosure forms filed with the Secretary of the Senate. The taxpayer-funded radio network hired the firm in the second quarter of 2011 to work on issues regarding “funding for NPR and affiliate stations.”

Oh, and we do get to hear from the lobbyist himself:

Michael Bracy, who will be the lobbyist representing NPR, told TheDC his pitch on Capitol Hill isn’t going to focus on NPR’s news and opinion content, only its music. “I think it’s safe to say some policymakers aren’t always up to date on how the music industry is working in the marketplace,” Bracy said. “We’re just making sure that musicians, independent record labels and others who [provide music content to NPR] have their policymakers and delegation end up knowing how they work with NPR and public radio stations.”

Right, because there isn’t enough music on the radio.  Seriously, wasn’t this the president who said, “We believe, in the words of our first Republican president, Abraham Lincoln, that through government, we should do together what we cannot do as well for ourselves.”

Well, then why can’t we do NPR for ourselves?  Why can’t they just be cut off and let them survive on private charity or even, gasp, commercials?

* And if someone objects that this is not necessarily our money, I will give the same answer every prosecutor gives in a money laundering case: money is fungible.

Update: Also, don’t hesitate to tell your favorite bin Laden death joke! I think it was Confederate Yankee who said that the first thing bin Laden said when he got to Hell was, “why are all virgins clones of Steve Carell?”

And for this week’s Friday frivolity, as you know the big superhero movie Thor releases today.  Metacritic is giving it mixed reviews.  IGN, one of my favorite entertainment sites, liked it:

Of course, this is part of Marvel’s plan to slowly put together an Avengers movie, which is all good with me and IGN makes the interesting case that this is not a safe-bet movie.

But one thing is for sure.  This Thor has to be better than, well…  this:

That is from a retrospective on how Thor has appeared on TV—and frankly it has largely been pretty bad.

Most of you will rememeber Cyrus Sanai as the guy who told the world about the collection of off-color material on the website/server of federal appellate judge Alex Kozinski — a story we covered here in depth on this blog when it broke. Some of you have since gotten to know Cyrus better as the guy who drops into the comments to lecture us all on his particular views regarding DNA statistics and the like. Now you can know him as the guy who was declared a vexatious litigant by the Los Angeles courts! (In essence, this means that, in the future, he has to ask for court permission before filing a lawsuit.)

The order is here. In it, the court finds that Sanai has engaged in “frivolous and improper” litigation tactics, including “attempt[ing] to acquire a fraudulent abstract of judgment” — tactics which, the court concludes, “speak to an improper motive to grind down the other side and to keep them from being able to move forward in the litigation.” Perhaps some of the most interesting parts of the order are the quotes from Judge Terry Green, one of several judges that Sanai has challenged. Here is a representative quote from Judge Green during one of the hearings on Sanai’s misconduct:

Sanai, of course, challenged the judge who issued this order, and in fact all judges in Los Angeles County. So there are your grounds for appeal — which means there will be yet another entertaining order (from the appellate courts) in the coming months and years.

It’s an endless saga. Which is kind of the court’s point.

Keep An Eye on Iran Today… (Update: An Ultimatum?)

Update: Haaretz adds this to the the story, clarifying it considerably:

Iran’s Supreme Leader Ayatollah Ali Khamenei has given President Mahmoud Ahmadinejad an ultimatum over the reinstatement of the country’s intelligence chief, a local website reported Friday.

Khamenei, who, according to the constitution, has the final say on all state affairs, vetoed Ahmadinejad’s decision last month to dismiss Heydar Moslehi.

The website Ayandeh quoted presidential advisor, Morteza Aqa-Tehrani, saying that in a meeting this week between Khamenei and Ahmadinejad, the ayatollah has pushed the president to either accept Moslehi or resign.

Ahmadinejad has not yet responded with a final decision on the supreme leader’s ultimatum, Agha-Tehrani added.

The Ayandeh report is yet to be confirmed by official or local media.

And while that makes some sense, there is that confirmation problem noted.  Anyway, read the whole thing.

Things are starting to get strange in Iran right now.   President Mahmoud Amadanutjob Ahmadinejad had asked the country’s intelligence minister to resign, but Ayatollah Khamenei had overruled him.  That led to an 11 day walkout by Amadinnerjacket Ahmadinejad.  And now, as often tryants do, Khamenei is apparently asserting control by silly claims of the supernatural.*

Close allies of Iran’s president, Mahmoud Ahmadinejad, have been accused of using supernatural powers to further his policies amid an increasingly bitter power struggle between him and the country’s supreme leader, Ayatollah Ali Khamenei.

Several people said to be close to the president and his chief of staff, Esfandiar Rahim Mashaei, have been arrested in recent days and charged with being “magicians” and invoking djinns (spirits).

Ayandeh, an Iranian news website, described one of the arrested men, Abbas Ghaffari, as “a man with special skills in metaphysics and connections with the unknown worlds”.

Incidentally, a djinn, or a jinn, is better known in the West as a genie.  Yeah, as in like this: 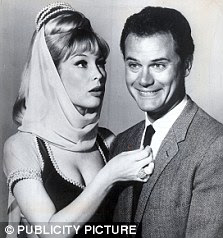 But in the West we have badly distorted the myth.  A jinn is pretty accurately described as a spirit, capable of various kinds of magic and even possession of a human.  That trapped-in-a-bottle and granting-three-wishes stuff only applied to one genie in one story, but we have run with it so to hear us talk, that’s how all genies are.

And this is officially part of Islam, much as angels are officially part of Christianity only angels are generally good, and jinn can be good, bad, or indifferent, as I understand it.  It’s hard to say how much anyone believes in the existence and actions of jinn, but now and then people do act on that belief.

Anyway, meanwhile we also are seeing this, well…  this:

A few minutes ago on May 5, 2011, Arab TV announced that Supreme Leader Ayatollah Khameini requested Iran’s President Ahmadinejad to step down from his post. This has not been confirmed nor verified by Western media as yet, however, it has been reported that several of his close aides are already under arrest.

That seems pretty unverified, but still just the arrest of people who are supposedly keeping him in power by the use of magic suggests that it is possible that we are reaching the end of the road for Ahmadinejad.  And if there is strife in Iran, would that be an opening for a popular revolution to kick down all of the tyrants?

Beats me, truthfully, but I will be watching.

* Mind you, I am not expressing sympathy for Mahmoud.  A fight between Ahmadinejad and Khamenei is just a fight between tyrants giving rise to the clichéd lament that you wish somehow both could lose.  And if the people rise up, that could happen.