The legal license President Obama used to justify U.S. military intervention in Libya expires today, and there’s little sign the White House is working quickly to get it renewed.

Exactly two months ago, Obama notified Congress of his unilateral decision to engage in “limited military action” to help defend the Libyan people from attacks by their leader, Moammar Gadhafi.

But under federal law — the War Powers Resolution of 1973 — Obama is only allowed to keep U.S. forces engaged in hostilities for 60 days, unless Congress declares war, authorizes funding for the effort or extends the deadline.

Congress has not enacted legislation authorizing military involvement in Libya, and the White House has not made a public effort to comply with the rule.

Experts say this is the first time an American president has defied the War Powers Resolution’s deadline for participation in combat operations without any concurrent steps by Congress to fund or otherwise authorize the role.

Well, as regular readers of this blog know, this war was illegal from day one. Follow that link if you want to read my analysis of it.  But the short version is this.  Under the War Powers Act, the president does not have the ability to start a war without congressional consent.  Period.  The sixty-day provision only applies to when we are attacked.  And if you think that this law is unconstitutional, then that doesn’t make it better—it makes it worse.  His power under the Constitution is less than under the War Powers Act.

And if you think my view is radical, I want you to consider the words of a certain constitutional scholar:
END_OF_DOCUMENT_TOKEN_TO_BE_REPLACED

No, that’s Evan not Eva…

Impressive, right? Meh, I am more impressed when a dog does it:

Today Is the Second Annual Everyone Draw Mohammed Day

So, if you are inclined to do it, go over to this page and learn how (please don’t sent submissions to my email, but to the email on the page).  And no talent is needed.  Like here’s one from today: 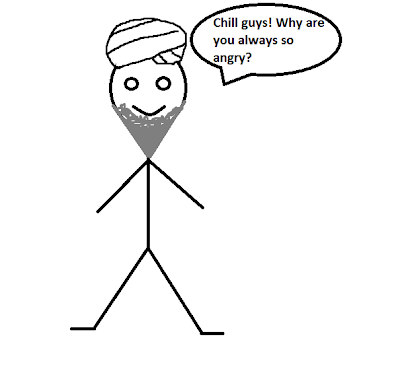 That’s right, tremble before this Dreaded Stickfigure of Blasphemy.  Tremble, I say!

(And yes, believe it or not, that is enough to offend the Islamofascists.)

And if you just want to enjoy the drawings that are often crappy as art but beautiful as a defense of freedom of expression and religion (or if you are an Islamofascist looking for a reason to get mad—like you need an excuse), go to the main page.

And if you miss the day for any reason, there is no law that says you have to submit one today.  You will strike just as much of a blow for freedom if you submit it tomorrow or the next day.

Anyway, once again thanks to regular commenters Dustin and JD who have been helping with this.

“I Do Have That Fire in My Belly”

When I saw the headline at Hot Air — the same headline above — I knew who had said it.

Answer below the fold.