Yeah, I learned my headline writing style from Tim Blair. What of it?

First and foremost, what steps were taken to stop Wikileaks director Julian Assange from distributing this highly sensitive classified material especially after he had already published material not once but twice in the previous months? Assange is not a “journalist,” any more than the “editor” of al Qaeda’s new English-language magazine Inspire is a “journalist.” He is an anti-American operative with blood on his hands. His past posting of classified documents revealed the identity of more than 100 Afghan sources to the Taliban. Why was he not pursued with the same urgency we pursue al Qaeda and Taliban leaders?

What if any diplomatic pressure was brought to bear on NATO, EU, and other allies to disrupt Wikileaks’ technical infrastructure? Did we use all the cyber tools at our disposal to permanently dismantle Wikileaks? Were individuals working for Wikileaks on these document leaks investigated? Shouldn’t they at least have had their financial assets frozen just as we do to individuals who provide material support for terrorist organizations?

So those are the questions she is asking.

First up is audio of Mark Levin discussing Mark Kirk during the election (sorry about the graphic; the dude who put together the video apparently likes it):

My top priority is turning our economy around. In Congress, we had a vigorous debate about the trillion-dollar stimulus. Most Americans agree this policy has failed. Unemployment in Illinois is stuck above 9 percent with more than 640,000 of our citizens out of work. Policies of the past caused our state to fall behind. Ten years ago, Illinois had at least 150,000 more jobs than today.

Many in Washington want to continue the spend/borrow policy of the past. They ignore the warning signs of more debt, taxes and inflation. Americans already pay some of the highest corporate taxes in the world. We cannot attract new jobs if employers are moving abroad to avoid higher taxes. By taxing more to fuel spending, we threaten a double-dip recession, pushing millions of Americans out of work.

Our mounting debts pose a clear and present danger to our future. Among bad “sovereign debtors” (i.e., governments), the Illinois ranks in the top 12, sharing infamy with the likes of Venezuela’s Hugo Chavez.

The first Senate bill I will introduce will be the Spending Control Act. This bill builds on two recent successful examples of our democracy making the right decisions for our long-term future. First, in the 1980s, the bipartisan Grace Commission set the standard for serious oversight by identifying federal spending that would add little to our nation’s growth, but much to its debt. Second, the three military base closing commissions showed that bipartisan dignitaries, once given the authority to submit a proposal to Congress for a straight up or down vote, actually cut spending where others failed.

The Spending Control Act will marry these two proposals — a new Grace Commission with a mandate to realign federal spending against its actual income, and “base closing” procedural powers to submit its proposals for simple “yes” or “no” votes in Congress. Given the successful record of all three base closing commissions to implement their reductions, despite a great hue and cry, prospects would be good under this proposal for our greatest of all democracies to depart its current course toward national bankruptcy and crushing future debt.

Iranian Nuclear Scientists Getting Stux in the Net

The last few days we have seen quite a few interesting stories about the Stuxnet virus/malware currently wreaking havoc in Iran’s nuclear program.  First was this very interesting Fox news reportage on the program:

Intelligence agencies, computer security companies and the nuclear industry have been trying to analyze the worm since it was discovered in June by a Belarus-based company that was doing business in Iran. And what they’ve all found, says Sean McGurk, the Homeland Security Department’s acting director of national cyber security and communications integration, is a “game changer.”

The construction of the worm was so advanced, it was “like the arrival of an F-35 into a World War I battlefield,” says Ralph Langner, the computer expert who was the first to sound the alarm about Stuxnet. Others have called it the first “weaponized” computer virus.

Simply put, Stuxnet is an incredibly advanced, undetectable computer worm that took years to construct and was designed to jump from computer to computer until it found the specific, protected control system that it aimed to destroy: Iran’s nuclear enrichment program.

The target was seemingly impenetrable; for security reasons, it lay several stories underground and was not connected to the World Wide Web. And that meant Stuxnet had to act as sort of a computer cruise missile: As it made its passage through a set of unconnected computers, it had to grow and adapt to security measures and other changes until it reached one that could bring it into the nuclear facility.

I mean that passage is so “holy sh-t” I wonder if the correct name for this thing should be “Skynet.”  Of course I urge you to read the whole thing.

But then there was a moment this morning that I liken to the second plane striking the WTC.  Now let me be clear.  I am not about to compare this thing to the evil of the 9-11 attacks, or anything like that.  But like a lot of you, I remember hearing about the first plane striking, and thinking it was an accident, or maybe just one lone crazy pilot.  And then I heard about the second plane and I knew this was an attack, and it had to be more than just one nut.  That was the feeling I had learning the next few facts.

You see, this morning we learn that two of Iran’s nuclear scientists were attacked in car bombs—meaning their cars were blown up.  One died and one is hospitalized.  And then we learn that according to Debka file…

END_OF_DOCUMENT_TOKEN_TO_BE_REPLACED

Bad Draw of Judges for the Proposition 8 Appeal

The defenders of Proposition 8 must feel a bit like Custer at Little Big Horn right about now.  As you might know, their appeal has gone to a panel of the Ninth circuit.  By my count, there are 26 judges in the Ninth Circuit, but in most cases, the appeal is heard by a panel of three judges.  Occasionally there is a rehearing en banc, which means by the entire slate, but as you might imagine that is kind of rare.

So who are going to hear this appeal?  Stephen Reinhardt, Michael D. Hawkins, and N. Randy Smith.  Ed Whelan gives you the ideological break down of the three:

Reinhardt (appointed by President Carter in 1980) may well be the most aggressive liberal judicial activist in the nation—and the most reversed judge in history. Hawkins, a 1994 Clinton appointee, is also regularly on the Left on the Ninth Circuit. Smith, who was appointed by President George W. Bush in 2007, is much more of a judicial conservative.

So Reinhardt is probably a lost cause, a man who rules very liberally and isn’t troubled overly much by the prospect of being reversed, apparently.  So by default defenders of Prop 8 will be pinning their hopes on Hawkins, probably mainly hoping they can convince him not to make new law.

But this isn’t all bad.  I wonder how convincing a victory involving Reinhardt would actually be to the Supreme Court.  But it certainly does increase the likelihood that the Ninth Circuit will force the Supreme Court to confront this issue.

You might not know his name, but you know his work: 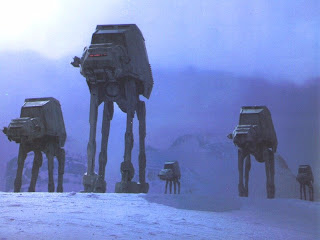 You can almost hear Vader saying, “Luke, I am your father.”  Irvin Kershner was the director of that work of genius, The Empire Strikes Back.  And he has passed on.

And you might enjoy this article on ten things you might not have known about this movie.  Like the original name for Yoda was… um… Buffy.

Which goes to show you that Jar-Jar was not the worst idea Lucas ever had.

The NYT On Publishing Stolen Material, Then and Now

Here is the NYT explaining almost exactly a year ago why it wouldn’t publish the Climategate emails:

A thick file of private emails and unpublished documents generated by an array of climate scientists over 13 years was obtained by a hacker from a British university climate research center and has since spread widely across the Internet starting Thursday afternoon. Before they propagated, the purloined documents, nearly 200 megabytes in all, were uploaded surreptitiously on Tuesday to a server supporting the global warming Web site realclimate.org, along with a draft mock post, said Gavin Schmidt, a NASA climate scientist managing that blog. He pulled the plug before the fake post was published.

I have a story in The Times on the incident and its repercussions, which continue to unfold. But there’s much more to explore, of course (including several references to me). The documents appear to have been acquired illegally and contain all manner of private information and statements that were never intended for the public eye, so they won’t be posted here.

By comparison, here they are explaining why the the newest wikileaking documents will be posted on their site:

The Times believes that the documents serve an important public interest, illuminating the goals, successes, compromises and frustrations of American diplomacy in a way that other accounts cannot match.

The Source of the Material

The documents — some 250,000 individual cables, the daily traffic between the State Department and more than 270 American diplomatic outposts around the world — were made available to The Times by a source who insisted on anonymity. They were originally obtained by WikiLeaks, an organization devoted to exposing official secrets, allegedly from a disenchanted, low-level Army intelligence analyst who exploited a security loophole.

In other words, he stole them, probably by hacking.  They go on to point out that “[o]f course, most of these documents will be made public regardless of what The Times decides.”  And explains later that “For The Times to ignore this material would be to deny its own readers the careful reporting and thoughtful analysis they expect when this kind of information becomes public.”

And I am sure any minute, now, the NYT will call for an investigation into these leaks, just like they did with the Valarie Plame, right?

Yeah, that is a rhetorical question, and a sarcastic one at that.