As usual, you are positively encouraged to engage in sock puppetry in this thread.  The usual rules apply.

Please, be sure to switch back to your regular handle when commenting on other threads.  I have made that mistake myself, alot.

[T]he circular-firing-squad warnings are well-taken, and I certainly agree with this: “When you start seeing people like Chris Christie being attacked for not being conservative enough, you know that the right is in danger of going off the rails. Or at least some parts of it.”

Don’t demand perfection, or you’ll be disappointed. Demand as good as you can get, and move ahead. Political change is a process, not an event.

Bingo. This is precisely what I have been saying for months. It’s nice to hear it from Professor Reynolds too.

But demanding purity and perfection at every stage — and declaring a willingness to lose ten elections in a row as an alternative — is a recipe for disappointment . . . and expansion of the welfare state and philosopher-king judges.

I boldly predict they will not. They need his traffic. So, even if he’s saying the exact same thing as I am, they won’t bash Instapundit.

Michael Steele: Vote For Me, You Racists!

So Steele is on a radio show with Al Sharpton and they have this exchange:

Sharpton said he couldn’t believe Republicans would even think of ditching Steele as RNC chair.

“You’re right. Well, you know, that’s going to be remain to be seen,” Steele said. 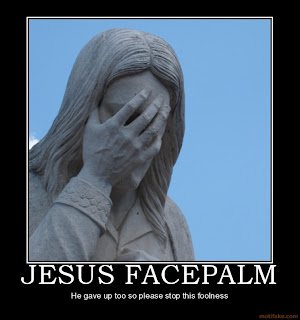 No, Mike, you complete idiot, they are talking about running you out because you have been a continual embarrassment.  You know, I live in Northern Virginia, and in 2006, I watched you run for Senate in Maryland, since the local stations covered that campaign pretty closely.  You were genuinely impressive in that campaign.  But then you became Chairman of the RNC and got a bad case of diarrhea of the mouth, saying one idiot thing after another.  Like saying the Afghan war is “a war of Obama’s choosing.”  I mean just google “Michael Steele gaffes” and you will get over 26,000 results.  Seriously it is hard to figure who is worse, you or Joe Biden, but we certainly know who hurts the Republican cause, more.  And I and other conservatives have looked at each other and thought, “he just can’t help himself, can he?”

That’s why your job is in jeopardy, because you can’t keep that trap shut or at least keep your foot from entering it.  Your race has nothing to do with it.

On the other hand, Ed Morrissey disagrees with me on this, arguing that Steele was not saying this was about race.  He writes:

Sharpton never used the word “racist,” and Strong [the reporter I quote above] correctly leaves it out of the quote, but his second paragraph makes Sharpton sound as if he made that argument explicitly and Steele’s “You’re right” was in response to it.  In listening to the actual interview, Sharpton made his accusation slightly less explicit than making that flat-out accusation.

No, he didn’t say the world “racist,” but he said it was about running out a “brother.”  It could have been more explicit, but it was explicit enough.  No one listening to that is confused about what Sharpton was saying, the least of all being Steele.  Sharpton was race baiting (big surprise) and Steele was yukking it up and agreeing with him, thus ratifying that race baiting.

Banning the Banning of Sharia In Oklahoma

One controversy that has been boiling since the election is over Question 755 in Oklahoma: a proposed state constitutional amendment banning the consideration of Sharia and the law of other nations or cultures generally, in court decisions.  Now, let me start with something that most commenters on the issue don’t seem to bother with very much: the proposed constitutional amendment itself.  It says:

The Courts…, when exercising their judicial authority, shall uphold and adhere to the law as provided in the United States Constitution, the Oklahoma Constitution, the United States Code, federal regulations promulgated pursuant thereto, established common law, the Oklahoma Statutes and rules promulgated pursuant thereto, and if necessary the law of another state of the United States provided the law of the other state does not include Sharia Law, in making judicial decisions. The courts shall not look to the legal precepts of other nations or cultures. Specifically, the courts shall not consider international law or Sharia Law. The provisions of this subsection shall apply to all cases before the respective courts including, but not limited to, cases of first impression.

So this won sufficient votes to become officially part of Oklahoma’s constitution, and a federal judge has enjoined the state from certifying the election results.  In other words, Judge LeGrange said that they are not allowed to say that this constitutional amendment was ratified.

(Look at the end of this post for a link to a pdf of the opinion and TRO.)

For lawyers that is the first alarm bell that this judge is making a mistake.  I have never heard of a federal judge saying that they are going to pretend that the constitution has not actually been amended unless there was a problem in the voting itself.  What they typically do is enjoin enforcement of the state constitutional provisions that violates the federal constitution.  In other words, the law is there, but it’s a dead letter.  The judge wants to declare that this law hasn’t even been rightfully passed, which is wrong.  If there is a violation of the first amendment’s religion clauses, the correct solution is to enjoin enforcement of the offending part.

And indeed, the whole amendment contains parts that no one could reasonably object to as a matter of constitutional law.  I didn’t include it in the quoted text, but it also amends their constitution to eliminate from the list of courts the “State Industrial Court” and replace it with the “Worker’s Compensation court,” a decision that couldn’t possibly be unconstitutional and indeed probably amounts to no more than a name change.

So that’s the first problem in this ruling.  It also has serious issues with standing.  Based on the case law, the plaintiff doesn’t have standing by virtue of the fact that he is a muslim and thus offended by this whole thing.  That kind of injury is not seen as particularized enough.  But he has a less laughable claim that this will invalidate his will, depending on what the document says.  Since I have not found a copy of it, I will just assume the judge is right on this point.

Getting to the merits, the court goes through the old “Lemon Test” that requires that “the governmental action (1) must have a secular legislative purpose, (2) its principal or primary effect must be one that neither advances nor inhibits religion, and (3) it must not foster an excessive government entanglement with religion.”  Of course the continuing vitality of Lemon v. Kurtzman is questionable at best, but let’s assume it applies.