The Race to the Bottom

Democrats, can we talk?  Look, I know a lot of you are scared.  You are in real danger of losing your jobs.  There used to be a time when Barney Frank could have a prostitution ring running out of his house and still sail though to reelection.  Now a columnist at the Boston Globe is saying it is time for him to go, and Frank is forced to invest $200K of his own money toward his reelection.  And let’s face it, no one wants to enter the job market in this economy.

But I have to believe that when you started in politics you gave a crud.  Okay, maybe not Alan Grayson, but I don’t think you intend to do us harm.  I think you were genuinely trying to do us good, and your failures are not the result of genuine malice.  You entered politics believing it could be a noble calling, right?

But the cold fact is a lot of you are about to lose your jobs.  It can’t be helped.  And in the process many of you are giving away your dignity.

I mean not Alan Grayson.  Best I can tell he never had any to start.  But let me give you an example.

Ron Klein (D-kleining), in Florida’s 22nd District denounced Alan West for allegedly associating with certain specific persons that Klein characterized as thugs.  Only one small problem.  Klein had associated with those exact same persons.  Also the DCCC put out a print ad about the scary black man West, which also turned out to be complete crap.

And we get a similar story, via Neal Boortz, discussing “probably the sleaziest campaign tactic ever.”  Now everyone here has seen the Devil and Daniel Webster race in Florida so you are probably thinking, “wait, worse than Grayson?”  Well, maybe not worse, but it’s actually a pretty close call.

END_OF_DOCUMENT_TOKEN_TO_BE_REPLACED

This is a major update, and retraction of the post that was at this address.  The original post said that the AP/MSNBC incorrectly stated that early voting boded well for the Democrats.  I originally saw where the officially termed “early voting” didn’t start yet, in Maryland and had fun with those news organizations based on that.  As pointed out by several commenters and actually a representative of the AP, the term “early voting” could be interpreted to include absentee ballots.  While still technically incorrect, and I encourage the AP and MSNBC to correct that technicality, in substance the story is correct (at least to the extent I know).  In all frankness, I wouldn’t have written this post if that possibility had occurred to me.

What can I say?  We are all human, and after the screw up the other day I was probably too eager to believe that the AP did it again.  I apologize sincerely to the AP and MSNBC and I thank those who corrected me for doing so.

And for the sake of openness, the text of the original post will follow after the break.

END_OF_DOCUMENT_TOKEN_TO_BE_REPLACED

Okay, here’s your open thread to argue all over the place about Juan Williams and his firing from NPR.  Go to it.

Let me kick this off with a quote from IMAO: “Wish we could do something, but it’s kind of an impotent threat for conservatives to say they’ll boycott NPR.”

Update: Weasel Zippers has an internal memo on the matter.  Discuss!

[Guest post by Aaron Worthing; no, I didn’t draw this “Mohammed Cartoon” but it is one of my favorites.] 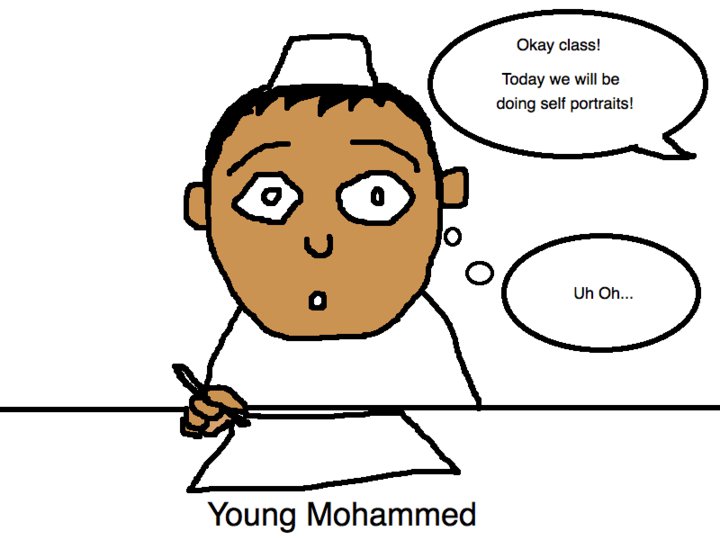 Way back in July, I noted the story that one of the men who threatened the creators of South Park was arrested.  At the time I wrote:

I wish I could say he was arrested for threatening the creators of South Park, but no, apparently no one thinks that is a problem, still.  Sigh.  But at least this jerk might go to jail.

Well, good news.  They apparently upped the charges to include his threats and he pled guilty:

Zachary A. Chesser pleaded guilty in federal court in Alexandria to providing material support to a terrorist organization, communicating threats and soliciting crimes of violence.

Chesser admitted that he encouraged attacks on the creators of the television show “South Park” for mocking the prophet Muhammad on their show.

Long time readers know that while back I participated in the Everyone Draw Mohammed protest.  For those who don’t know, it was kicked off by Molly Norris who then withdrew.  She said she was just kidding, but I always suspected (and I had some evidence I am not disclosing) that she was scared off.  The fact she has essentially gone into witness protection is probably the most powerful piece of evidence.  Anyway, she dropped out, but in that Army of Davids sort of way, a lot of other people took up the banner.  The logic of it, ironically enough, was explained on South Park the first time they dealt with the cartoon Jihad, when one character says the following:

END_OF_DOCUMENT_TOKEN_TO_BE_REPLACED

That’s a quote from a post sharing more startling facts about the economic engine that is Texas.

(And no, I don’t speak Spanish, so I am only kind of sure that is right.)