For a Cheap Laugh…

I want you to meet a lovely young woman:

Pictured here with her fiancé, Matthew Murakami, she got married last weekend.

And what does she do for a living?  She is a lawyer.

I have long told this joke: “My mother always told me that she thought that my name would make a great name for a lawyer.  And despite her encouragement, I have entered the legal profession.”

Anyway, snickering aside, I wish Mr. and Mrs. Murakami a long and happy life together.  I suspect this will be a case where she will very happily take on her husband’s name and not do like a hyphenated thing.

Is the Mandate Necessary and Proper to Carry Obamacare into Execution?

Strap yourselves in, kiddies, because this is going to be a long one.

One issue I glossed over, and I shouldn’t have, in analyzing Judge Hudson’s Obamacare ruling yesterday is the application of the necessary and proper clause, which is cynically referred to as the elastic clause, because in the minds of many observers, it can be stretched to reach anything.  As you know, the Federal Government is denied every power not granted.  Most of those grants of power are found in Article I, Section 8, and the last of those grants of power, the necessary and proper clause, reads as follows:

Congress shall have Power… To make all Laws which shall be necessary and proper for carrying into Execution the foregoing Powers, and all other Powers vested by this Constitution in the Government of the United States, or in any Department or Officer thereof.

In other words, Congress has the power to carry out its other powers.  Indeed, the classic explanation of this clause’s meaning is contained in McCulloch v. Maryland and is so often quoted it practically feels like it is in the constitution:

And let me pause and say something about the meaning of words, here.  Like it or not, John Marshall’s opinion in McCulloch declared that “necessary” is not the same as “absolutely necessary” and thus he defines the term down to mean, more or less, useful.  Feel free to disagree with that interpretation but it is how it has been for over two hundred years and it’s not likely to change anytime soon.

Moving on, Orin Kerr says that Judge Hudson got the application of the clause wrong, writing:

I’ve had a chance to read Judge Hudson’s opinion, and it seems to me it has a fairly obvious and quite significant error. Judge Hudson assumes that the power granted to Congress by the Necessary and Proper Clause — “To make all Laws which shall be necessary and proper for carrying into Execution the foregoing Powers” — does not expand Congress’s power beyond the Commerce Clause itself.

He then quotes this passage from the opinion as “key” to the reasoning:

If a person’s decision not to purchase health insurance at a particular point in time does not constitute the type of economic activity subject to regulation under the Commerce Clause, then logically an attempt to enforce such provision under the Necessary and Proper Clause is equally offensive to the Constitution.

So, Kerr’s reasoning goes, the judge failed to understand that the Necessary and Proper Clause could reach beyond the bounds of the commerce clause.  And then Kerr believes that the Necessary and Proper argument is “straightforward” from there.  If Kerr has  articulated his reasoning, I haven’t seen it.   But, on the surface, there is some appeal to using the Necessary and Proper Clause.  As I have said, and the Feds have argued, if the mandate is struck down and the rule on pre-existing conditions and similar provisions are retained, then this would implode the health insurance business.  So that seems kind of necessary, right?  But we will see in a moment, that isn’t enough.

END_OF_DOCUMENT_TOKEN_TO_BE_REPLACED

Michelle Obama on Feds Controlling What Kids Eat in School: “We Can’t Just Leave It Up to the Parents”

The nanny state marches on:

Speaking at Monday’s signing ceremony for the “Healthy, Hunger-Free Kids Act”– a law that will subsidize and regulate what children eat before school, at lunch, after school, and during summer vacations in federally funded school-based feeding programs — First Lady Michelle Obama said of deciding what American children should eat: “We can’t just leave it up to the parents.”

The law for the first time gives the federal government the authority to regulate the food sold at local schools, including in vending machines.

Here is the full quote so you can’t accuse me of taking it out of context:

“But when our kids spend so much of their time each day in school, and when many children get up to half their daily calories from school meals, it’s clear that we as a nation have a responsibility to meet as well,” Mrs. Obama said. “We can’t just leave it up to the parents. I think that parents have a right to expect that their efforts at home won’t be undone each day in the school cafeteria or in the vending machine in the hallway. I think that our parents have a right to expect that their kids will be served fresh, healthy food that meets high nutritional standards.”

In other words, we can’t just leave it to the parents to teach their children how to behave when the parents aren’t around. Nor (and this is really the issue) can we leave such issues to the control of the benighted locals. At such times, it is necessary for the benevolent federal government to step in. “I’m from the [federal] government and I’m here to help.” That’s ten terrifying words, Ron; I added one.

The story leaves you wondering who is in charge:

Obama said that if the bill had not reached his desk for his signature, “I would be sleeping on the couch.”

Now if you’ll excuse him, he has a party to get to. He has been keeping the First Lady waiting.

The law has been championed by the first lady as part of her campaign to end childhood obesity. Michelle Obama said that while it may seem ironic to be addressing childhood hunger and obesity at the same time, “it’s really just two sides of the same coin.”

Obama said that if he called that quote ridiculous he’d be sleeping on the couch.

Thanks to a loyal reader.

It’s Come to This

I have been accused of being a nerd (guilty!) several times, but even for me this is a bit much.  Behold, Darth Vader Lingerie: 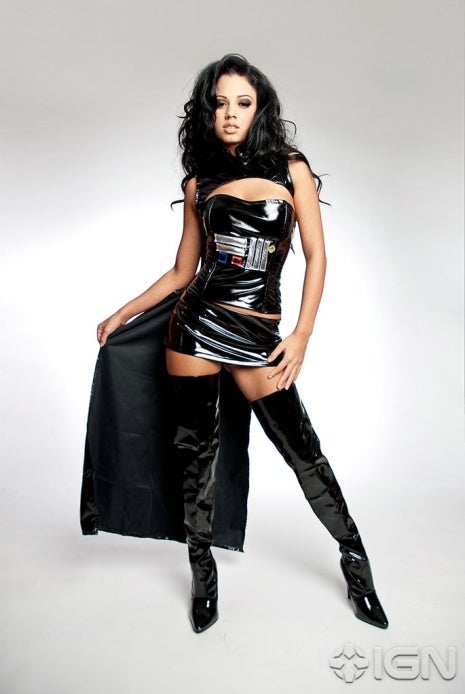 Wow and that costs only about $178.  You know, all I can say is that if you are a man and you meet a woman willing to dress up like this for free, marry that girl.

This is all from IGN’s 2010 Gamer Girl Gift Guide, which is a collection of gifts you should never, ever consider buying a real life girl unless you want her to leave you, featuring girls who probably won’t give you the time of day in real life.  You can go to the article and peruse the selections, many of which seem like an excuse to get a model into a tight t-shirt (mind you, I am not complaining).  But this one seemed particularly special:

END_OF_DOCUMENT_TOKEN_TO_BE_REPLACED

Josh Marshall is Preposterous On His Face

And the award for the most clueless analysis of yesterday’s Obamacare ruling goes to…  (drum roll please…)  Josh Marshall:

[T]he idea that buying health care coverage does not amount to “economic activity” seems preposterous on its face.

Indeed, it would be, if that was what the case was about. But in reality, the case was about whether the decision not to buy health insurance is an economic activity.  I mean, seriously, how can you discuss this issue without grasping this basic facet of the argument?  How can you read the opinion without grasping that this was a major issue in the case?  I know this is complex legal mumbo-jumbo, Josh, but let me give you one of literally around a dozen examples that discuss what was really at issue in the case:

The Commonwealth maintains that the failure, or refusal, of its citizens to elect to purchase health insurance is not economic activity historically subject to federal regulation under the Commerce Clause.

I know there is a lot of difficult legal jargon there, Josh, but what it means is that they are saying that when you choose not to buy something, it’s not economic activity.  /sarcasm off

Now normally I am very tolerant of a lay person’s ignorance of the law, but I can’t excuse this.  The language about what the issue was, was pretty plain.  And in fact, in the current version of this post, he links to an article from a fellow TPMer who discusses exactly this legal issue at length.  And yet even then it doesn’t dawn on him that he is fundamentally misunderstanding what the case is about?

I’m calling bull on that.  He knows.  He understands.  He is just choosing to tell a stupid lie in his effort to spin the thing.  I mean watch the spinning going on in its full context:

So the first line asserted, lamely, that no one took the arguments that won yesterday seriously a year ago.  Now obviously that is BS (any honest lawyer would tell you that it was unprecedented and problematic even under expansive interpretations of the commerce cause), but I don’t want to focus on the BSitude of it, but on what he is trying to suggest, that somehow this decision was out of the mainstream.  Then he makes that preposterous “preposterous on its face” assertion.  What is the purpose of that?  To further characterize this viewpoint as somehow illegitimate.  And finally notice the insinuation then that this was the result of Republican “court packing” with “activist judges.”  Again, it’s BS, but don’t focus on that, but what he is trying to do with that BS.  He is trying to argue that this is nothing more than crazy activist Republicans gone off the reservation.

And you want to tell me he has no idea that this entire paragraph is BS?  Well, I don’t believe it.

But even if you did believe that he was innocently mistaken, isn’t the result the same?  If he really believes what he was shoveling, then he is so blinkered by his partisanship that his ability to perceive reality has been compromised.  Which means 1) you shouldn’t trust him anymore, and 2) he should find some other line of work.