On Sunday, after making the oh-so-parochial admission that he usually does not bother looking at the Washington Post [Epistemic closure alert! -K] , NYT columnist (and former Enron advisor) Paul Krugman took issue with Dana Milbank’s praise for Obama in standing up to other progressives angry at his proposed bipartisan tax deal:

This is a hopeful sign that Obama has learned the lessons of the health-care debate, when he acceded too easily to the wishes of Hill Democrats, allowing them to slow the legislation and engage in a protracted debate on the public option. Months of delay gave Republicans time to make their case against “socialism” and prevented action on more pressing issues, such as job creation. Democrats paid for that with 63 seats.

Krugman thinks that is an Orwellian rewrite of history:

Um, that’s not what happened — and I followed the health care process closely. The debate over the public option wasn’t what slowed the legislation. What did it was the many months Obama waited while Max Baucus tried to get bipartisan support, only to see the Republicans keep moving the goalposts; only when the White House finally concluded that Republican “moderates” weren’t negotiating in good faith did the thing finally get moving.

There are at least two problems with Krugman’s claim. First, the Baucus “Gang of Six” started their deliberations on June 17, 2009. The Gang was essentially done by September 8, 2009. That’s less than 3 months. Once you consider the Senate was in recess from August 10 through September 7, Krugman’s “many months” turns out to be barely “months.”

Second, during those “many” months, someone was telling us the fate of ObamaCare was being undermined by relatively conservative House Democrats and centrist Democratic senators who opposed (or wanted to water down) the proposed government-run insurance plan:

And yes, I mean Democratic senators. The Republicans, with a few possible exceptions, have decided to do all they can to make the Obama administration a failure.

Someone wrote that on June 22, 2009 — less than a week after the Gang started meeting. That someone did not work for the Washington Post and presumably does not live in the “Village” Krugman thinks is inventing a narrative about the intra-party struggle over the so-called “public option.” Indeed, that someone, who claims to have followed the debate closely, seems to forget the Senate bill later almost died when Maj. Ldr. Harry Reid tried inserting the government-run plan into it, only to be met with a filibuster threat from Sen. Joe Lieberman, who caucuses with the Democrats. That someone is engaging in the all-too-Orwellian tactic of rewriting history to his liking, ignoring not only his past admissions that the delay was caused by fighting within the otherwise ample Democrat majorities, but also that those evil centrists were correct all along that there were not enough votes in the Senate for a government-run insurance plan.

Which, it isn’t. It is simply maintaining the current tax structure to allow people to keep more of their own money.

That doesn’t stop the editors from spinning like a top:

A top advisor to President Obama said Sunday a $858-billion package of tax cuts and jobless benefits will pass Congress without major changes, despite a revolt by some House Democrats.

[Republican Rep. Paul] Ryan, asked about the effect of $858 billion in new deficit spending, said the GOP supported lowering tax rates and curbing spending. “We’re going to come out of the gates going after spending: spending cuts, spending controls and reforms of the structure of spending,” he said.

Did anyone ask him about the effect of $57 billion of unfunded spending in unemployment benefits, together with maintaining the current tax structure? Because that’s what’s actually going on.

Not that you’d know that reading this article.

Terrorist “Work Accident” in Sweden? And a Connection to the Mohammed Cartoon Controversy

So last night there was a terrorist bombing in Sweden, possibly while it was technically the 11th, which means that they were trying to create an attack on 12/11.  One terrorist died in the blast, and two bystanders were injured.  Its not clear whether the injured include any of the terrorists.  Some of this BBC article suggests that the second explosion was accidental (meaning premature), hence the “work accident” line in the title of this post.  You can also see coverage at Cnn and Jpost.

But Reason highlights the “grievances” of the terrorists:

Our actions speak for themselves. As long as you don’t stop your war against Islam, and you degrade the Prophet, and your support for that stupid pig [cartoonist Lars] Vilks.

Vilks is one of the famous Swedish cartoonists who drew Mohammed (pedophilia be upon him) in the ongoing protests against Islamic death threats aimed at speech suppression.  For instance, here is one of his comics: 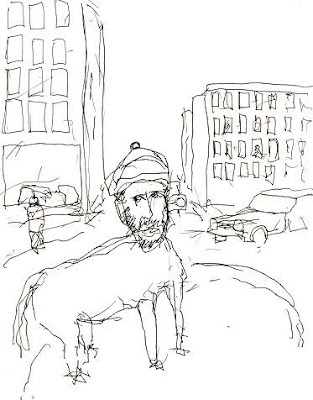 Yeah, kind of sucks as art, but is gorgeous as a defense of freedom of speech and religion.  And if you think that is awful, then you shouldn’t look at these either.  And you really shouldn’t look at my cartoon.  Yep, it’s a crime against humanity just on artistic merit alone.

Vilks himself as attacked in what I think is best characterized as a “low level mini-riot” when showing the cartoons at a university.  Let me repeat that for emphasis.  People admitted to a university were so idiotic as to think that a cartoon merited violence.  Personally if I was in charge of that university, every single student participating would be thrown out for being insufficiently open minded.  Anyway, Cinema Steve posted video of the incident ages ago and it is still frightening to watch.  And of course Cnn had a nice video on Vilks life dealing with the terror threat, even if they are too much of a bunch of p-ssies to show the actual offending cartoon, instead opting to show a picture of a page showing the cartoon with the cartoon ridiculously blurred out.  I mean how on earth, from a journalistic perspective, can you have an article discussing a controversy brought about by a cartoon without actually showing the cartoon?

So the question is whether this incident or others will dissuade the Swedes from their support of freedom of speech and religion.  Or will they go all Viking on the terrorists?

And, related item, in Pakistan a man has been arrested for blasphemy for, well…  let’s let the AFP explain, because it really is too stupid to believe:

A doctor has been arrested for insulting the Prophet Mohammed in Pakistan, police said on Sunday, in a second high profile case throwing the spotlight on the country’s controversial anti-blasphemy laws.

Naushad Valiyani was detained on Friday following a complaint by a medical representative who visited the doctor in the city of Hyderabad.

“The arrest was made after the complainant told the police that Valiyani threw his business card, which had his full name, Muhammad Faizan, in a dustbin during a visit to his clinic,” regional police chief Mushtaq Shah told AFP.

It’s a brilliant marketing strategy.  Legally change your name to Mohammed, and then give out your cards.  If anyone has the temerity to dispose of that card, arrest them!

This is the kind of stupidity that censorship leads to.

Further Evidence That the Mystery Contrail Was Flight UPS902

I contacted the proprietor of the Contrail Science blog regarding my belief that the contrail I observed was north of Catalina Island, as opposed to his theory that it was flight UPS902. He sent me a Google Earth file that convinced me I was wrong.

Using Google Earth, you can open the file regarding that particular flight here. A tour of how to use it follows:

As a reminder, here is the drawing I made on top of a photo from my approximate vantage point:

We face south/southwest, so north is basically to the right.

And here is the Google Earth image from somewhere around my vantage point:

Keep in mind that my drawing was from what I saw inside the house. It undoubtedly continued its arc up and to the left, and if I had gone outside I think the arc would have looked just like the Google Earth screenshot you see above.

But while it looks like it is north of Catalina from that vantage point, it is not. Using the Google Earth file, this is what it looks like from overhead:

This is pretty good evidence. I think this guy has nailed it.

P.S. As I noted in the post below, he says the blue arc is a shadow. He clarifies by e-mail that it is a crepuscular shadow. You can see photos of similar shadows here. He says it appears odd because it is a single shadow.

More Photos of That Weird Contrail from Last Month

[Important update here, indicating that the flight path was actually not north of Catalina Island, even though it appeared to be. — P]

World Net Daily (yes, I know, but just be patient) has a wealth of links to more information on that weird contrail I told you about last month. Following the various links, I found a series of photos that captures something very close to what I saw — but from a different vantage point, in Long Beach. Here are two of the photos from different times:

There are more in the extended entry.

My perspective was closer to the contrail, from the hill in between this photographer and the contrail. If you look at my contemporaneous descriptions of the contrail (and review the other photos and discussion in the extended entry), you will see that this photo and others match my description of a “weird, band of translucent blue that faded into the bright orange” contrail headed into the sea:

The blue was about the same hue as the ocean . . . It almost looked like an effect of lighting — like a dark, curved spotlight, or a rainbow without color. You had the impression that you could see through it (which is why I called it translucent).

I located this photo (as well as others in the extended entry) by reading this fascinating analysis by a blog calling itself Contrail Science. The author claims that the blue band is actually a shadow from the contrail. He gathered together evidence from numerous different sources to argue that the flight was left by flight UPS902. (Note that this is different from the argument made by Corky Boyd that the flight was US Airways Flight 808.)

In the extended entry, I have more photos from the Long Beach photographer. I have also gathered together the full original descriptions I provided to you over three different posts, including diagrams and comparative photographs.