As Texas is being slammed by a massive winter storm, many residents have been without power for days during a week of sub-freezing temperatures. Reports point out that the state did not heed the warnings of experts to winterize equipment, and many of the state’s power companies opted not to spend the extra money to do so. This morning, power is being slowly restored. The problems continue to compound as many state residents are now facing food shortages as supplies have dwindled, and a shortage of potable water has forced residents to boil their water before use:

Over 2 million Texans have regained power since Wednesday morning after energy providers say they made significant progress in remedying days-long outages overnight, but many of the state’s residents are still struggling without access to power, food and water.

The total number of Texas customers without power reached just above 500,000 Thursday morning—down from over 2.7 million Wednesday—the lowest since widespread outages began early Monday, according to PowerOutage.US.

Austin’s energy utility said 81,000 customers remain without power Thursday morning (down from 220,000 earlier this week), while CenterPoint, which services Houston, said just 2% of its customers (46,000) still don’t have power.

The state is still struggling amid the freezing temperatures and millions of Texans are advised to boil water before drinking as water levels remain dangerously low. Power and water disruptions led to the evacuation of multiple hospitals across Texas on Wednesday evening, including a pediatric hospital in Austin. Local officials are urging residents to conserve power and water. “Top priorities are hospitals and fire hydrants,” Houston Mayor Sylvester Turner said Thursday morning. The storm has also impacted food supply, with multiple local reports on Wednesday detailing empty grocery stores and food pantries struggling to reach residents due to the weather.

While Texas struggles through the weather crisis on top of a pandemic and desperate residents try to cope with the disaster, one would expect that an all-hands-on-deck effort would be made by state leaders. Sadly, it would be foolish to expect that, as Sen. Ted Cruz demonstrated:

Sen. Ted Cruz flew to Cancun, Mexico, with his family this week as Texas dealt with a winter storm that as of Thursday still has left 500,000 without power, Fox News has confirmed.

Photographs of Cruz, R-Texas, at an airport began circulating on social media late Wednesday, with people alleging that the senator had left the state for Cancun amid a major crisis. A Republican source told Fox News that the allegations Cruz was traveling to the Mexican city are true.

“The photos speak for themselves,” the source said.

Well Senator Cruz is flying to Cancun while millions of Texans do not have electricity #Priorities #ThanksforNothingSenator @ProjectLincoln @keithedwards @shannonrwatts pic.twitter.com/X1fRqOie6l

Just confirmed @SenTedCruz and his family flew to Cancun tonight for a few days at a resort they've visited before. Cruz seems to believe there isn't much for him to do in Texas for the millions of fellow Texans who remain without electricity/water and are literally freezing. pic.twitter.com/6nPiVWtdxe

As reminder, Cruz was one of a number of Republican officials who mocked the state of California when a massive heatwave resulted in widespread power outages: 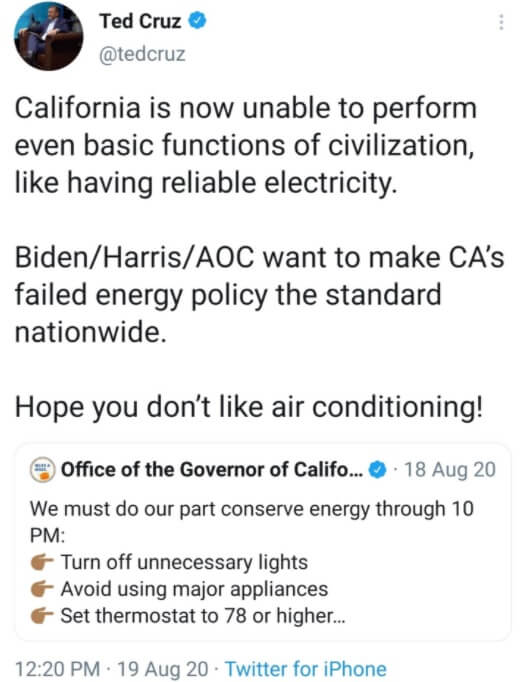 His response to his state’s disastrous power failure during this week’s storm? Eh:

A blizzard strikes Texas & our state shuts down. Not good.

Not only are the optics terrible, but knowing that an elected official flew the coop during a weather disaster of Herculean proportions is an affront to every resident of the state. Will voters remember this in 2022?

Anyway, Cruz must’ve felt the blowback because he is flying back home today.

Patterico’s Pontifications has a number of readers in Texas. Our prayers for Patterico’s family members there, Dustin and his family, Gawain’s Ghost, DRJ and her family, and Beldar. My apologies to anyone whose name I have forgotten to mention.

Here are ways that you can help out our friends in Texas.

196 Responses to “Texas Senator Cruzes To Cancun During Deadly Storm”