This seems as good of a time as any to remind readers that Harry Reid really is a nasty piece of work.

As recently as last month, Reid gloated about the false accusation he made against Mitt Romney during the 2012 presidential campaign. This in spite of evidence showing that Reid was outright lying. But to a corrupt bastard like Harry Reid, proof means nothing. Only winning. And he has certainly shown that there is no line he will not cross in order to do just that.

This was Reid last month when asked about his Romney accusation:

People bring that up, it’s one of the best things I’ve ever done. Why? Because I knew what he had done was not be transparent and forthright about his taxes and to this day he hasn’t released his tax returns. … Did I want to do that? No. I had the information, I tried to get somebody else to do it. I tried to get somebody in the Obama ‘reelect,’ I tried to get one of the senators, I tried to get one of the outside groups, but nobody would do it. So I did it. And with that, like everything, I think in life, here’s something I learned from my father, if you’re going to do something, don’t do it half-assed, don’t play around. With the Mitt Romney stuff, I didn’t play around. …

And when asked about defending an accusation that was proven to be untrue, Liar-Liar-Pants-On-Fire-Reid justified it this way:

Of course there are numerous examples which demonstrate Reid’s dishonesty and seared conscience, so it’s no surprise that in a desperate move, he fired off a letter to James Comey today accusing him of violating the Hatch Act: 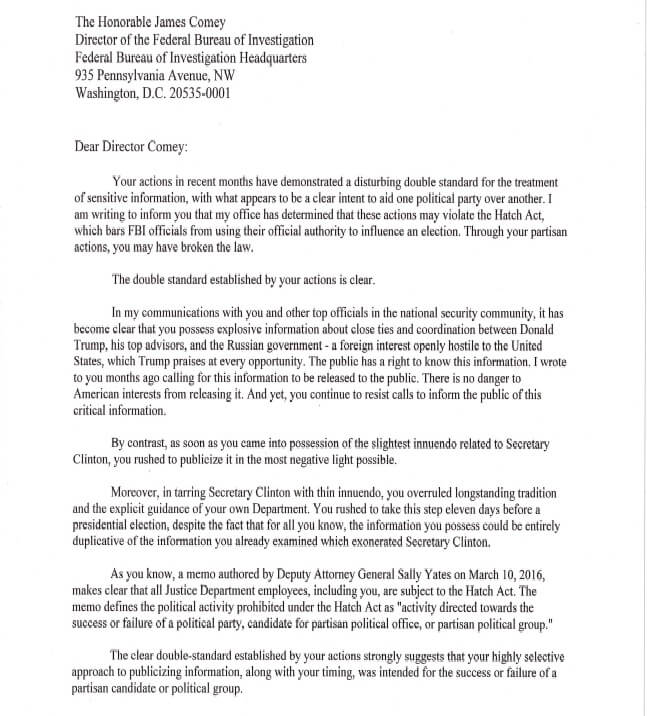 And to think that just a few short months ago, Reid had nothing but praise for Comey:

“He’s been a fair, impartial director of the FBI.”

In response to an anti-Trump PAC making a similar accusation against Comey, John Sexton explained a Hatch Act violation:

For this to be a violation of the Hatch Act it would be necessary to prove that Comey was not performing his duties as FBI Director but was raising this to impact the election. Obviously this coalition doesn’t have any proof that’s the case but by making the accusation they help the Clinton campaign controversialize the announcement as a partisan act.

I do not think he has committed a crime,” he told the Post, referring to the latest email investigation. (But) I do think he has abused his office.

From Sen. Cotton: “Harry Reid is a disgrace to American politics, among worst men ever in Senate. He can’t go soon enough, and many Democrats privately agree.”

And during an interview with Brett Baier, Gowdy offered this: “Thank God he’s leaving, is my initial reaction. My second reaction is: I did not know Mormons used drugs. And anyone who is capable of sending out that press release has to be under the influence of something.”