In a joint statement, the U.N. Secretary-General Ban Ki-moon and U.S. Secretary of State John Kerry announced that a cease-fire is set to begin Friday at 8:00 am in Gaza. It is set to last for 72 hours.

And while CNN wonders if the peace will last, the U.N. is talking about war crimes:

The bloodshed prompted the United Nations’ top human rights official to warn that war crimes may have been committed, accusing Israel of “deliberate defiance of obligations (to) international law.

U.N. High Commissioner for Human Rights Navi Pillay referred to the shelling of homes, schools, hospitals and U.N. “premises,” while insisting, “We cannot allow this impunity, we cannot allow this lack of accountability to go on.”

“None of this appears, to me, to be accidental,” Pillay said.

Obvioulsy, Pillay listened to Hillary Clinton’s enlightening analysis wherein she explained that if Gaza weren’t so darn small, Hamas wouldn’t have to hide rockets in hospitals and schools and other civilian areas. Yep. And did you know that it was Hamas that had its back against the wall, not Israel? Oh, the things you can learn.

UPDATE BY PATTERICO: I am just happy to hear that the concerns of the FAA and others were “alloyed.”

CIA Spied on Senate, Lied About It

The Central Intelligence Agency improperly and covertly hacked into computers used by Senate staffers to investigate the spy agency’s Bush-era interrogation practices, according to an internal investigation.

CIA Director John Brennan has determined that employees “acted in a manner inconsistent with the common understanding” brokered between the CIA and its Senate overseers, according to agency spokesman Dean Boyd.

The stunning admission follows a scathing, 40-minute speech by Senate Intelligence Chairwoman Dianne Feinstein on the Senate floor back in March, in which she accused the CIA of secretly accessing her panel’s computers that were used to review documents related to the government’s torture, detention, and rendition policies deployed during George W. Bush’s presidency. The powerful California Democrat lacerated the CIA for attempting to impede her panel’s investigation and charged the agency with possibly violating the Constitution.

At the time, Brennan denied Feinstein’s accusations, telling NBC News reporter Andrea Mitchell, “As far as the allegations of the CIA hacking into Senate computers, nothing could be further from the truth.… That’s beyond the scope of reason.”

Democrats are outraged, apparently because they were conducting a review of Bush-era CIA actions. I am outraged, because the principle matters more than the personalities or politics. (See the difference? I thought you might have caught that.)

Pols are saying Brennan should resign. That would be a start, although I won’t hold my breath. (Where would a top national security official get the idea that he could lie to Congress without consequence, anyway?)

Me, I want to see people criminally investigated. I have full faith and confidence in Eric Holder to do what is right.

P.S. Barack Obama? He read about it in the newspaper.

Four Minutes Of My Life I Can Never Get Back

For a reason which can only be attributed to some bizarre shift in the universe, I followed this tweet and lost 4 minutes of my life.

Oh, The Unfairness of it All:

[W]hen I tell “serious men” that I’m a political reporter for Cosmpolitan.com, their facial expressions soften into a sort of visual head-pat. When I quickly — often too quickly, a symptom of my own soft prejudice and lingering anxiety about what name-dropping a women’s magazine says about my intelligence and my skills as a journalist — add that before this I was a columnist at The Guardian and a contributor to publications like Al Jazeera America and The Nation, the light flickers back behind their eyes, along with the question: Why are you writing there?

Seriously, Jill, you really can’t figure out why people might not take anything in Cosmo seriously?

Personally, I’m so exhausted by their covers alone and finding out there are yet 50 or 60 or 70 more things to learn to drive him wild, that there simply isn’t the energy or will left to actually open up the magazine and read it.

Sheila Jackson Lee, Co-Sponsor of Resolution to Impeach Bush: “We did not seek an impeachment of President Bush”

The House voted yesterday to authorize a lawsuit against Obama for unilaterally changing the date by which businesses must comply with the provisions of ObamaCare. Democrats raised a lot of money recently by comparing this to impeachment — so naturally Big Media makes this, not about the merits of the lawsuit, but about whether conservatives are ruling out impeachment. Just look at Dana Milbank’s column, which doesn’t even tell you what the proposed lawsuit is about — but spends the whole column discussing whether the lawsuit is a stalking horse for impeachment.

Conservatives, for their part, are dutifully falling in line with the Big Media narrative, and making this all about impeachment — with the True Conservatives pushing it, and the Pragmatists worried about the effects it might have on mid-term elections.

I will admit that my kneejerk reaction was that the suit was a dodge for a body unwilling to take on Obama for his excesses. But a kneejerk reaction is not always the right one. If you’re interested in the actual merits of the suit, and reading some reasons why the arguments you’ve heard against it might not be right, here’s a primer from National Review. Short version: contra what you may have heard, courts are sometimes willing to take on these issues (see the recent Supreme Court decision on recess appointments as one example), and why not sue in addition to other possible remedies? My view is: there’s no need to run down a possibly successful tactic until you have fully examined it.

Anyway, as interesting as the impeachment debate might be, we might consider focusing on what the lawsuit is about: Obama’s usurping of the legislative function. Or, you can just keep on playing into the lefty Big Media narrative and talk impeachment, impeachment, impeachment. Your choice — but as Simon Jester often says, think twice before doing something that makes David Axelrod smile.

In the meantime, here’s some good fun: Sheila Jackson Lee proclaiming yesterday that Democrats did not seek to impeach Bush.

I ask my colleagues to oppose this resolution for it is in fact a veiled attempt for impeachment and it undermines the law that allows a president to do his job. A historical fact that President Bush pushed this nation into a war that had little to do with apprehending terrorists. We did not seek an impeachment of President Bush, because as an executive, he had his authority. President Obama has the authority.

As BuzzFeed noted, Sheila Jackson Lee was a co-sponsor of Dennis Kucinich’s resolution to impeach Bush for leading us into the Iraq War. 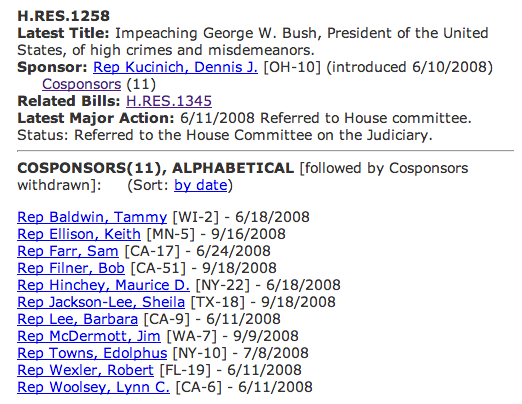 The surprise is not that they lie, but that they are so laughably bad at it.