The Candidate in the Gray Flannel Suit

It’s a vintage reference, but one that Michael Barone might find apt to describe Mitt Romney, who was three years behind Barone at a private boy’s school in Bloomfield Hills, Michigan:

[A]s I look back on his biography, it seems to me that Romney missed one experience which changed the outlook and even the vocabulary of most of his schoolmates. This is a man who never experienced the ’60s. You know what I mean: peace demonstrations, dope smoking, ironic detachment, all that.

He spent a year in Stanford when, despite the calendar, the ’60s were just starting to arrive in Palo Alto; he debated the protesters. He then worked as a Mormon missionary in France (why doesn’t some debate questioner ask him to speak some French for us?) and witnessed with disapproval the May 1968 upheaval in Paris.

RTWT, but the excerpt ends there because it points out the weakness in Barone’s thesis.  If Romney debated protesters at Stanford and witnessed the May 1968 riots in Paris, he probably had more experience with what Barone is calling the Sixties than most Americans.

It may surprise some to see baby boomers, so often represented as a generation of peaceniks and civil rights activists, producing this Republican realignment. But boomers were — and still are — a highly divided generation that actually tilts a bit to the right. On the college campuses of the 1960s, there were twice as many members of the right-wing Young Americans for Freedom as of the left-wing Students for a Democratic Society. It’s no different 40 years later. A survey done last month by the media research company Frank N. Magid Associates found that twice as many boomers call themselves conservative as liberal. The only thing that unites this generation are its members’ efforts to impose their diametrically opposed ideals, values and morality on everyone else through the political process.

The pictures people take and save, as opposed to the ones they never take or the ones they discard, say a lot about how they understand their own times. And in our archives as much as in our mind’s eye, we still record the ’60s in hazy cliches — in the stereotype of the idealistic youngster who came through the counterculture and protest movements, then settled down to comfortable bourgeois domesticity.

What’s missing? The other side in that civil war. The right-wing populist rage of 1968 third-party presidential candidate George Wallace, who, referring to an idealistic protester who had lain down in front of Johnson’s limousine, promised that if he were elected, “the first time they lie down in front of my limousine, it’ll be the last one they’ll ever lay down in front of because their day is over!” That kind of quip helped him rise to as much as 20 percent in the polls.

It’s easy to find hundreds of pictures of the national student strike that followed Nixon’s announcement of the invasion of Cambodia in the spring of 1970. Plenty of pictures of the riots at Kent State that ended with four students shot dead by National Guardsmen. None I could find, however, of the counter-demonstrations by Kent, Ohio, townies — and even Kent State parents. Flashing four fingers and chanting “The score is four/And next time more,” they argued that the kids had it coming.

Although Perlstein makes his point about pictures, one could easily make the same point about songs.  Check Billboard’s Top 100 Songs for 1966, 1967, 1968, 1969 and 1970 to see how little revolution there is to be found there.  In a 1969 Gallup poll, only 4% of American adults said they had tried marijuana.  Even accounting for the stigma causing under-reporting, drug use was not widespread at the time.

The revisionist narrative of the Sixties Perstein describes is largely the result of the fact that the New Left captured one of America’s two major parties and most of its culture industry during the period.  And the New Left has been so successful that even those who lived it — even someone as smart as Michael Barone — tends to lapse into the hazy cliches.  If Romney was part of what Nixon called the Silent Majority, it means he was in the the majority.  The counterculture was called the counterculture for a reason, even if they’ve partially succeeded in making it Establishment today.

Update: Althouse links, writing: “Aaron Worthing has an excellent post about the litigation over the FDA rules requiring new warning labels on cigarettes.”  Thank you for that high praise.

Every now and then I see a case or an issue, that I intend to look into but then for one reason or another, I can’t find the time when the issue is still fresh.  That was definitely the case in the recent litigation entitled RJ Renyolds et al v. the FDA et al., so today when I saw that the Federal Government was appealing this decision, I thought this was a good excuse to finally read the decision and see if I had something interesting to say about it.  And what do you know, there is something interesting there…

Here’s what is going on in the case.  Congress passed a law demanding that the FDA come up with new graphic warning labels for cigarettes—graphic, as in using pictures.  They would be required to cover at least 50% of the front and back of every cigarette package and 20% of all advertisements.  And here is what the FDA came up with: 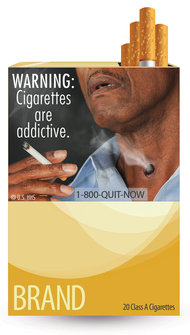 That comes from a New York Times story whose headline succinctly captures the goal of the new warnings: U.S. Releases Graphic Images to Deter Smokers.  They understood intuitively that the purpose of these images was not to inform people but to persuade them.  Isn’t that obvious to you?  For instance, taking the 8 images, look at the second from the left on the top, showing a crying woman.  This conveys no information about the effects of cigarette smoke, it just makes you imagine how horrible the people you love would feel if you died.  Similarly with the baby on the bottom left, it’s not information, it’s a guilt trip.  And the one right next to it, is simply a guy announcing he is quitting (or turning into the lamest superhero ever).

And guess what?  That is sort of a problem, under the First Amendment, which is what led the Reynolds court to grant the tobacco companies an injunction preventing enforcement of this new labeling rule.  Judge Leon’s decision is well written and I believe lay people will get what he is saying if you decide to read it, but let me sum it up.  Generally most instances of coerced speech is subject to the strict scrutiny standard requiring that the rule be narrowly tailored to serve a compelling governmental interest.  But there is a limited exception to that rule in relation to so-called “commercial speech” where the government can compel people and companies selling products to provide truthful and uncontroversial information about those products.  That is how, for instance, the FDA is allowed to force food companies to put nutrition labels on your food packages.

END_OF_DOCUMENT_TOKEN_TO_BE_REPLACED

So right now democrats and pro-union groups are working to recall Governor Walker and well, they are going to be as honest about it as you would expect:

The state board overseeing the potential recall election of Wisconsin Governor Scott Walker tells the MacIver News Service that they will rely upon temporary workers to scrutinize recall petitions and those individuals will not be expected to catch any duplicate signatures submitted by recall organizers.

This revelation comes as one statewide liberal group is actively promoting the collection of duplicate signatures, paving the way for a lengthy process wherein Walker supporters will challenge the validity of the recall petitions.

One Wisconsin Now, a liberal non-profit, posted on its website “You can circulate or sign a recall petition even if you have already signed another recall petition.”

This advice, however, will complicate the signature challenge process and runs counter to the advice of nonpartisan state election regulators.

“While it is not illegal to sign more than once, we do not suggest people sign a second time unless they have good reason to believe the first petition they signed was somehow fraudulent,” Reid Magney, GAB Spokesman.

They’re barely trying to hide their contempt for election law.

Comedy Gold: Fast Eddie Responds to Being Named One of the Least Influential Persons Alive

I admit that I don’t like Ed Schultz. I have written before that my theory was that

the entire Ed Schultz routine is an act anyway.  He has decided to be exactly what the hard left imagines Rush Limbaugh to be.  Not that Limbaugh is all those things, but there are enough on the hard left who believe that he is those things that they think Schultz is simply fighting fire with fire.  But I cannot believe that Schultz is so deluded as to actually believe what he is shoveling.  He is like Alan Grayson, a carny barker pretending to be a flamethrower.

But none of that takes away from the sheer comedy gold when you hear Fast Eddie respond to the story.  Seriously, go listen to it, here, and then come back.  You’ll thank me.

It’s hard to know which is the funniest part—when he blames prejudice against redheads or asserts that Anderson Cooper is behind it all.  It’s a conspiracy, I tell you!  A conspiracy!

By the way, Eddie, you big fat idiot…  influence is not a matter of ratings but of people watching and believing you are right about something.  So a guy like Anderson Cooper could get less ratings (if he gets less ratings), but be so strongly watched and trusted by politicians or other media types that he still has a greater influence.  And in your case I am convinced that 90% of your audience is people from organizations like Newsbusters who are paid to watch with the DVR running in case you say something stupid.  Or at least stupider than usual.