But at least Obama gave an impressive statement about the downgrade.

More on Biden and His Fat Mouth

Read the title out loud and you’ll get a sense of how I really feel.

The other day I noted how Joe Biden had run his mouth about who killed bin Laden, putting SEAL Team 6 at risk. I said: “there is no way to know whether this was an orchestrated ambush targeting Team 6. But it is an important reminder why it’s not just comedy relief to have cynical glory-seekers and complete buffoons at the highest levels of government.”

Well, the possibility of an orchestrated ambush looks much more likely — as an Afghan official tells the press that’s exactly what happened:

The Taliban lured US forces into an elaborate trap to shoot down their helicopter, killing 30 American troops in the deadliest such incident of the war, an Afghan official said Monday.

A senior Afghan government official told AFP on condition of anonymity that Taliban commander Qari Tahir lured US forces to the scene by tipping them off that a Taliban meeting was taking place.

“Now it’s confirmed that the helicopter was shot down and it was a trap that was set by a Taliban commander,” said the official, citing intelligence gathered from the area.

“The Taliban knew which route the helicopter would take,” he continued.

In other words, a Taliban no doubt incensed at bin Laden’s death set up an ambush designed to target exactly the sort of forces that would respond to a report of high value targets.

Did the families fear this? You betcha. Watch at 2:58 as the dad of one of the fallen SEALs goes off Matt Lauer’s feel-good script to lash out at the “sheep” like Biden who put his son at risk:

Visit msnbc.com for breaking news, world news, and news about the economy

You know, it’s really strange, Matt, that 90 some-odd days ago SEAL Team 6 had a big victory, and possibly sheep in high places said things that made many of us very uncomfortable. And now some 90 some-odd days later, SEAL Team 6 has suffered a terrible tragedy. And I just pray that during these last days, these next days, they ‘ll allow SEAL Team 6 — the wives, the children, the families — to grieve, to bury their dead, and not make it political.

Next October when Hollywood is spending tens of millions to release a big “Obama killed bin Laden” movie blockbuster to influence the election, let’s keep in mind what the buffoons — the sheep — like Biden did. Is that me making it political? No, sir. It’s me noting when others do. When morons like Biden run their mouths, they put good men at risk. When the Obama administration decided to release all the information about who killed bin Laden, they put good men at risk.

And for this they should be re-elected?

This is me spitting at that idea.

Presidential elections are won by electoral votes, not popular ones. Gallup has released state-by-state approval numbers for Pres. Obama, based on daily tracking data from January through June, consisting of nearly 90,000 interviews nationally. The numbers suggest a fluid race in 2012.

On the surface, the numbers look bad for Obama. The president’s approval rating is 50% or higher in only 16 states, plus the District of Columbia (of course). Those states represent only 215 of the 270 electoral votes needed for election.

However, Obama could pick up the necessary electoral votes by winning the next four states — Iowa, Pennsylvania, Florida and Georgia — where Obama has had 47-49% approval.

Most people reading that last sentence immediately recognize the limitations of the poll, which is of adults, rather than registered or likely voters. Obama is not likely to win Georgia, and polls show Obama in trouble in Florida and Iowa (where the Obama bus tour is headed, coincidentally). Conversely, most observers would give Obama a chance in states like Virginia, Ohio, Nevada, Colorado (no recent poll), and Oregon, where Obama has worse approval numbers with adults now.

In short, the new Gallup numbers are interesting but do not contain any results likely to change anyone’s opinion of Obama’s prospects for re-election.

Fannie and Freddie Downgraded, Too

But of course the stock market is not happy.

Can we have visible signs of decline under an Obama presidency? 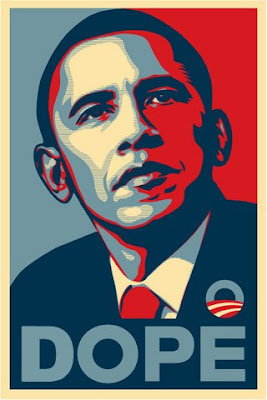 Full text of S&P’s announcement below the break.

END_OF_DOCUMENT_TOKEN_TO_BE_REPLACED

NEWSWEEK Breaks Out the Pellicano Kneepads

Was it a condition of NEWSWEEK’s interview with federal prisoner Anthony Pellicano that they allow him to pretend without contradiction that he didn’t menace Anita Busch?

Hint to reporters: when someone pleads to something, it’s OK to say they did it.

With a Louisville Slugger in the trunk of his car and a computerized phone-hacking system in his Sunset Boulevard office, Pellicano dug up dirt on his clients’ enemies and helped make those problems go away—whether it was the embittered spouse of a mogul, an inconvenient gay lover, or a nosy journalist. That is, until he allegedly hired someone to intimidate the wrong nosy journalist—Anita Busch of the Los Angeles Times—and the FBI got involved, blowing the lid off the biggest wiretapping operation this side of Watergate.

What is this word “allegedly” doing there? Let’s review: this man pled no contest to threatening Busch in October 2009:

Hollywood private eye Anthony Pellicano and another man, accused of threatening reporter Anita Busch in 2002 to scare her off a story, pleaded no contest today to making a criminal threat.

But you’d never know it from the fellatio-as-news article interviewing Pellicano. They mention his federal convictions for possessing explosives, wiretapping, and the like — but allow him to pose as innocent of threatening Busch:

Pellicano gained access to Hollywood’s A-list after meeting celebrity power-attorney Bert Fields, who started using his services. Eventually, the detective was spying on Sylvester Stallone, comedian Garry Shandling, and Nicole Kidman. When he wasn’t digging through their dirty laundry, he was power-lunching with the stars, tooling around in his black Mercedes and dark sunglasses, and rubbing elbows with moguls like Ovitz, Universal Studios president Ron Meyer, and manager Brad Grey, now head of Paramount (Grey even attempted to make an HBO pilot with Pellicano, about a Hollywood detective).

It all came to a screeching halt in 2002, when federal agents started looking for evidence of his involvement in a plot to threaten the L.A. Times’s Busch—who had previously written about the downfall of Ovitz, and was now pursuing a story about alleged mob ties to movie star Steven Seagal. Busch discovered the windshield of her car smashed, and a dead fish left behind with a note reading “Stop.” (The man who vandalized Busch’s car, a Pellicano flunky named Alexander Proctor, told the FBI that he’d been hired by the detective. But Pellicano still maintains he had nothing to do with harassing Busch, who is suing him and Ovitz.)

“Maintain” it all you like, pal. You did it. You pled to it. NEWSWEEK won’t say it. I will.

Meanwhile, NEWSWEEK lets Pellicano portray himself as a hero:

Pellicano is currently appealing his conviction, and if he’s successful, he could be out by 2013, six years before his eligible parole date. He’s pinning his hopes on an 86-page appeals brief that accuses the government of misconduct, misrepresentation, and constitutional violation. Among other things, the brief charges that the agents’ search of his office was illegal. The U.S. Attorney’s Office has until late September to respond to the brief.

In the meantime, Pellicano has 30 civil lawsuits hanging over his head, including the one from Busch. Will Pellicano rat out anyone in the civil cases? Don’t count on it, says his attorney and friend Steven Gruel. “Everyone expected this to be the case that rocked Hollywood, and it didn’t happen, and it didn’t bring in the great names they hypothesized would happen,” the attorney says. “He wouldn’t buckle, and that is why he is in Big Spring, Texas, today.”

Yeah, that and all the crimes he committed.

The claim that the search of his office was illegal, by the way, is a story that disgraced Los Angeles Times reporter Chuck Philips tried mightily to push. This very blog you’re reading revealed that Philips liked the story so much, he wrote letters to inmates trying to get them to sign onto that story. The letters were phrased as follows: I don’t know if it’s true, but I’m told that the FBI tried to feed you a story about Pellicano . . . and you should know that they have admitted that some of your conversations were not recorded, so do you remember these things I am suggesting you should remember? Look at excerpts like this:

Philips admitted to me that he had written these letters.

Meanwhile, Busch’s employer, the Los Angeles Times, treated Pellicano as the trustworthy one and Anita as a vaguely crazy person whose stories of being menaced were just a little suspect. If you haven’t pored through the links in this post before, do so now. They are eye-opening.

The media, and Busch’s employer, did its level best to conceal the full extent of the dirty business Pellicano was involved with, and Philips’s involvement in writing slanted stories to try to get Pellicano’s conviction reversed. The cover-up continues today with NEWSWEEK’s shameful story.

First, the spin creates mixed messages. To quote Jim Treacher: “Yesterday, the downgrade was fake. Today, the Tea Party caused it. ‘This isn’t happening… and it’s all your fault!’” In particular, it muddles the Obama administration’s official position, which is that S&P is mistaken. If the administration is trying to stave off similar downgrades from other ratings agencies (even if the impact is more limited than many think), having the president’s campaign flack suggesting a real phenomenon is at work is counter-productive.

Second, the left’s focus on S&P’s comments about GOP opposition to higher taxes (and avoidance of S&P’s comments on entitlement reform) sends a toxic subliminal message to voters. Consider this from the S&P explanation:

Compared with previous projections, our revised base case scenario now assumes that the 2001 and 2003 tax cuts, due to expire by the end of 2012, remain in place. We have changed our assumption on this because the majority of Republicans in Congress continue to resist any measure that would raise revenues, a position we believe Congress reinforced by passing the act.

Of course, S&P may not be entirely accurate on this point: Obama blew up a grand bargain with Speaker Boehner that included $800 billion in revenue. But taken on its own terms, S&P’s explanation necessarily assumes not only that the GOP will continue to oppose raising tax rates, but also that the GOP will succeed in doing so. S&P’s analysis implies: (a) the House GOP is unlikely to suffer serious losses in 2012 from their position on the debt ceiling; (b) Pres. Obama may not win re-election in 2012; (c) if Pres. Obama is re-elected, he will likely be beaten a third time on taxes, despite being a lame duck with nothing to lose. These are the narratives being advanced by Democratic spin about a “Tea Party downgrade.”

As the WSJ’s James Taranto quipped: “So the argument for re-election is going to be ‘Don’t blame Obama, he was no match for the Tea Party’?”