Day Seventeen of Stengel-gate: The National Constitution Center Sends Me Mail, We Talk about Who is Paying for This, and We Talk About Accreditation…

Update: I have to apologize for forgetting to thank Mandy Nagy, a.k.a. Liberty Chick, for helping with much of the research on this.

Background: a few weeks back Time magazine published, as its cover story, an article by Richard Stengel.  Reading it, I was stunned to discover fourteen clear factual errors in his piece, and I have been on a bit of a crusade since then to force Time to either correct or retract the article.  And I have been examining how other media outlets and organizations have treated Stengel.

So yesterday you saw how I finally got them to make a response, of sorts, where they tried to pretend to be neutral about the accuracy of statements such as “[i]f the Constitution was intended to limit the federal government, it sure doesn’t say so”  But sharp readers surely noticed that they didn’t answer a crucial question: “what is Mr. Stengel’s exact role in the National Constitution Center?  Specifically, does he teach others about the Constitution?”

Well, I emailed them two days ago asking for clarification on this question, and this morning I got this response from Ashley Burke, Director of Public Relations:

Mr. Stengel was President and CEO of the Center from 2004-2006. He currently serves as a member of the Advisory Board of the Peter Jennings Project for Journalists and the Constitution. In this role, he does not interact directly with our Jennings Fellows, but rather provides recommendations to National Constitution Center staff regarding our annual Jennings Project conference. As a nonpartisan institution, the Center welcomes speakers and advisors with diverse viewpoints; therefore, we are happy to have Mr. Stengel remain in this role.

That is encouraging.  At least he doesn’t actively teach, although I don’t know how someone so clueless about the Constitution could serve as an advisor in figuring out how to educate others.  So I took my objections about his qualifications directly to her in response:

END_OF_DOCUMENT_TOKEN_TO_BE_REPLACED

Comedy Gold: I Guess the B—h Set His Son Up, Too

Marion Barry’s son has been arrested for…

The younger Barry was arrested May 28 after neighbors reported yelling and sounds of fighting inside his apartment in the 4300 block of Martin Luther King Jr. Avenue SW, according to charging documents.

When police arrived, according to the documents, Barry refused to open the door, jumped out of his first-floor apartment window and ran, leaving blood on the floor.

Inside the apartment, the charging documents said, police found five sandwich bags determined to contain marijuana, as well as a vial three-quarters full of a liquid later determined to be PCP.

Barry later returned to the apartment, where he was treated for a bleeding foot and arrested, the documents said. While in the apartment, police seized his passport and mail, according to the charging documents.

Oh my, the crack pipe just doesn’t fall that far from the tree (allegedly), now does it?

I was pessimistic when I read this opinion piece yesterday:

By overreaching, the president has positioned himself for defeat

Republicans have a golden opportunity to break Barack Obama’s presidency, ensuring he will be a one-termer. Mr. Obama has backed himself into a corner on the debt-limit talks; the GOP can smash his re-election prospectsif they have the will – and intelligence – to do it.

Mr. Obama has asked that the nation’s $14.3 trillion debt ceiling be raised, and he knows that cannot be done without support from House Republicans. Moreover, along with Treasury Secretary Timothy F. Geithner, Mr. Obama warns that fiscal Armageddon is coming unless the ceiling is lifted before Aug. 2 – the date Mr. Geithner claims the United States begins defaulting to its debtors.

Mr. Obama seeks a “grand bargain”: a debt-reduction package that includes $1 trillion in tax increases to accompany entitlement spending cuts, including Social Security and Medicare. He wants to go big. His target is to slash $4 trillion over 10 years. He has repeatedly vowed to veto any “small” debt-limit increase – one that allows America to keep paying its bills until a more comprehensive agreement is ratified. In other words, Mr. Obama has issued an ultimatum to congressional Republicans: Either break your 2010 campaign pledge not to raise taxes or else be blamed for the debt-limit debacle. As he put it, it’s time to “eat our peas.” The president is playing Russian roulette with the economy and our nation’s future.

Yet he has badly played his weak hand. Like the dictator Napoleon Bonaparte, who sought to spread the radical French Revolution across Europe, Mr. Obama has committed a fatal mistake: overreach. The president has issued a public ultimatum that either must be upheld or he must back down from. Either way, it is Mr. Obama’s political credibility that threatens to be shattered.

And you should read the whole thing and what he wrote sounds all well and good, but… I kept thinking that there was a danger that they were underestimating Obama.  I mean didn’t someone say Healthcare would be Obama’s Waterloo?

So I thought maybe all of this was premature.  And then I read this:

Cantor said the president became “agitated” and warned the Virginia Republican not to “call my bluff” when Cantor said he would consider a short-term debt-limit hike. The meeting “ended with the president abruptly walking out of the meeting,” Cantor told reporters in the Capitol. “I know why he lost his temper. He’s frustrated. We’re all frustrated.”

Okay, I am not even on the President’s side but I feel it is necessary to do a… 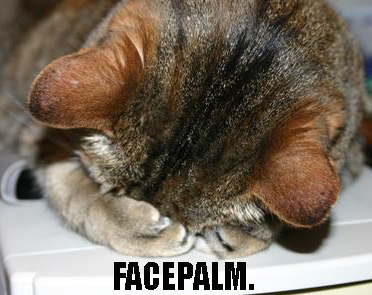 Here’s a pro-tip, Mr. President.  If you don’t want someone to call your bluff, don’t tell them that you are bluffing.

Seriously, I long for the days when we had a President who knew how to play poker.