“Betty Ford Oh Won’t You Be My Valentine?”

That’s a lyric from a song about alcoholism by David Gray, called “We’re Not Right” from his classic album “White Ladder.”  You can listen to a pretty good recording of it, here.  And oddly I felt it was a nice tribute to the First Lady who passed on earlier this day, whose name has become synonymous with struggling to overcome addiction.

Equally fitting is this picture of her and her husband Gerald, taken in the White House. 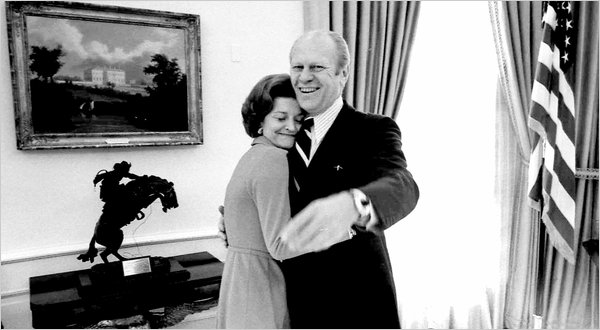 Gosh, that is a really likable image, right there.

So this is a thread to remember the first lady.

Ironic Quote of the Day

I came across this commencement speech and read it out of curiosity because of who the speaker was.  Some of the quotes, given who was saying it, floored me.  See if you can guess who said all of this:

Now, in the world that I live in people always think they’re right. Now, I know that’s probably true of a lot of worlds, and maybe it’s even true of the faculty here. But part of what happens—ooh, that got a little bit of a … [laughter], that’s why they’re sitting behind the students—there’s a premium placed on opinions. There’s a premium placed on being outrageous, on being provocative—not necessarily having opinions that are rooted in reality and rooted in fact, but opinions that will get people’s attention. To me, that’s not very valuable.

The great New York senator, Pat Moynihan, once said, you’re entitled to your own opinions, but you’re not entitled to your own facts. Now, I couldn’t agree more, but that has become a quaint notion in our society because even though there is more information available than there has ever been in history, people are basically inventing their own facts—and they’re using specious information to justify it. And that’s why—I have it right here—I brought my long-form birth certificate [laughter] to show that I was born in America.  [Applause and laughter]

At the same time, there is what I think of in my world and I think in American politics on the left and right, there’s an epidemic of certainty—people who are absolutely sure that they know that they’re right.  And I find this a little irksome. And those of you who have studied science know that modern neuroscience tells you that certainty is a state of mind; it’s not an appraisal of the state of the world. It’s some temporal lobe stimulation, some synapses firing in your brain, that gives you that feeling of knowing that you’re right. It doesn’t necessarily correspond to the world. The brain creates that feeling of rightness, not the world itself.

And of that, I am almost certain.

So who said it?  Look below the fold…

END_OF_DOCUMENT_TOKEN_TO_BE_REPLACED

Laurence Tribe: No, the President Can’t Ignore the Debt Ceiling

I have been critical of Laurence Tribe in the past, but I have to say this passage from his Op-ed on whether the President can ignore the debt ceiling, is spot on:

[A]nother part of the Constitution specifically reserves the right to Congress and Congress alone to put us into debt.  In Article I, Section 8, Paragraph 2, the Constitution states that “Congress shall have the power … [t]o borrow money on the credit of the United States[.]”  That means Presidents don’t have the power to do so, and the Courts don’t—only Congress does.  And nothing in the language of Section Four of the Fourteenth Amendment suggests that they were altering this clause of the Constitution so as to give the President the power to take us further into debt without Congress’ consent.

Oh, wait, that isn’t Tribe’s essay.  That was from my post at Big Journalism discussing Stengel’s theory that the Fourteenth Amendment empowers the president to unilaterally sink us even deeper into debt.  Which is my backwards way of pointing out that Tribe’s reasoning is very similar, when he actually says this:

Other proponents of a constitutional deus ex machina have offered a more modest interpretation of the public debt clause, under which only actual default (as opposed to any action that merely increases the risk of default) is impermissible. This interpretation makes more sense. But advocates of the constitutional solution err in their next step: arguing that, because default would be unconstitutional, President Obama may violate the statutory debt ceiling to prevent it.

The Constitution grants only Congress — not the president — the power “to borrow money on the credit of the United States.” Nothing in the 14th Amendment or in any other constitutional provision suggests that the president may usurp legislative power to prevent a violation of the Constitution.

And truthfully, I think Mr. Tribe out-classed me a little in his argument.  For instance, he points out that most people do not like to invest in debt instruments that might not be legal in the first place:

So the arguments for [the President] ignoring the debt ceiling are unpersuasive. But even if they were persuasive, they would not resolve the crisis. Once the debt ceiling is breached, a legal cloud would hang over any newly issued bonds, because of the risk that the government might refuse to honor those debts as legitimate. This risk, in turn, would result in a steep increase in interest rates because investors would lose confidence — a fiscal disaster that would cost the nation tens of billions of dollars.

Do read the whole thing.  And I would be remiss if I didn’t mention Ernest Istook’s excellent post on the subject, too, who teases out a few additional wrinkles making it even more obvious that the Fourteenth Amendment was not designed to give the President the power to put us deeper into debt.

Meanwhile I am sad to report that talk of breaching the debt ceiling has led to his plainly racist call for Obama’s impeachment:

Of course you probably know I am calling this person a racist as a joke.  Honestly, I have never heard the name Tim Scott before today, but I believe he is right on Constitution.  Breaching the debt ceiling would be, in my mind, an impeachable offense.

But on the other hand, would the rest of Congress agree to go along with that?  So long as the Democrats hold the Senate, that is very much in doubt.  That is the Republicans might impeach in the House, but the Senate would not vote to remove.

Now it might be light blogging today (we’ll see how it goes), but…

First, Big Journalism has posted a version of my piece on NPR and elevated it to Featured Story status.  Cool.  Of course regular readers got to see virtually the same work two days earlier, so that makes you ahead of the curve and in general one of the cool kids.

Second, did you know that Amazon.com is selling a version of the article, for about three bucks?

Which led me to think… I wonder what would happen if they started to get some bad user reviews…?  hint, hint…

Update: And a belated thanks to Average Joe for pointing out to me that they were selling the article on Amazon.  I would suggest that if you buy it, you should do so using the search box on the side, so that Patrick gets a little money back (with no additional cost to you).  But…  really, are there going to be a lot of people who regularly read this site and want to pay $3 for that POS?