I told you about a month ago when the Playstation Network came back online, with what I called “sorry bribes”—free downloadable games clearly offered as their way of mending fences.

Well, that offer was good for only a month…  which ends Sunday.  So…  get yer free crap while you can.

The list of games and my opinions of them, are here.

So I have been following the news today that there were rumors about the case against Dominique Strauss-Kahn (who is a man) falling apart, but I hated to post based on those rumors.

Well, they aren’t rumors any more.  The District Attorney of New York wrote a letter to DSK disclosing significant problems in his accuser’s credibility.  If all of this is true, and the case depends on the alleged victim’s credibility, it’s instant reasonable doubt.  First, it recites various stories she told of horrific oppression, disclosed when trying to seek asylum in the U.S., and then it says:

In interviews in connection with the investigation of this case, the complainant admitted that the above factual information, which she provided in connection with her asylum application, was false. She stated that she fabricated the statement with the assistance of a male who provided her with a cassette recording of the facts contained in the statement that she eventually submitted. She memorized these facts by listening to the recording repeatedly. In several interviews with prosecutors, she reiterated these falsehoods when questioned about her history and background, and stated that she did so in order to remain consistent with the statement that she had submitted as part of her application.

Additionally, in two separate interviews with assistant district attorneys assigned to the case, the complainant stated that she had been the victim of a gang rape in the past in her native country and provided details of the attack. During both of these interviews, the victim cried and appeared to be markedly distraught when recounting the incident. In subsequent interviews, she admitted that the gang rape had never occurred. Instead, she stated that she had lied about its occurrence and fabricated the details, and that this false incident was part of the narrative that she had been directed to memorize as part of her asylum application process. Presently, the complainant states that she would testify that she was raped in the past in her native country but in an incident different than the one that she described during initial interviews.

(emphasis added.)  Which, oy, is bad.  Now it is incorrect to say that this means she was not raped.  But when a woman claims a man raped her, and has a history of falsely claiming to have been raped and even putting on the waterworks when necessary, that blows a massive hole in your case.  Reportedly DNA proves they had sex, but her credibility is crucial to determine if she is telling the truth about her lack of consent.  There are other ways to prove rape, but they are generally hit and miss.  So unless there is some powerful evidence that doesn’t depend on her credibility I expect prosecutors to dismiss.

Your credibility is one of your most valuable assets.  She (allegedly) squandered hers in exchange for passage into the United States.  As a result, now, in theory she could have been genuinely raped and because of her deception, she might have severe difficulty proving it.  And indeed, one possible result of this incident, whatever precisely happened, is that she might be deported (it’s my understanding that she is just a greencard holder).

The other question that this leaves unanswered: what about Tristane Banon’s allegations?  From an old post on the subject:

A French writer who claims Dominique Strauss-Kahn sexually assaulted her nine years ago is to file an official complaint, her lawyer has announced.

Tristane Banon previously described the attack, which happened when she was in her early 20s, in a television programme in 2007, when she called Strauss-Kahn, whose name was bleeped out, a “rutting chimpanzee.”

She consulted a lawyer at the time, but was persuaded not to take action by her mother, a regional councillor in the Socialist party and friend of the Strauss-Kahn family. Banon is goddaughter to Strauss-Kahn’s second wife.

Those charges appear to still be pending.

And for this week’s Friday Frivolity, they are reuniting Monty Python, sort-of, even with their fallen comrade, Graham Chapman: 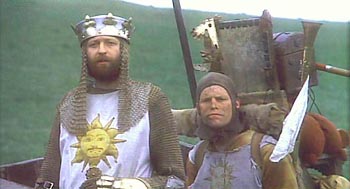 A Monty Python reunion film is brewing, and not just that but it’ll star member Graham Chapman — who’s been dead since 1989.

The New York Times reports that a 3D animated film of Chapman’s “absurdist” memoir A Liar’s Autobiography: Volume VI is in the works, with most of the other Python members “performing roles that are cut together with Chapman’s voice from a taped reading made shortly before he died.”

The new film has 15 different animation companies working on chapters that will run between three and 12 minutes long, each in a different style of cartooning. Eric Idle is the only Python member who hasn’t signed on for the film (yet).

We can certainly hope they will do that legendary comedy troupe justice.