I know I am being hard on the Johnson (and maybe using one too many d–k jokes), but you can sense desperation in Johnson’s impotence in his latest post on Weinergate.

You see, he figured it all out.  It’s a conspiracy!!!  A conspiracy, I tell you… to destroy Obamacare!

It’s hard to know where to even begin with that one.  Let’s start by saying that Johnson should have talked to a lawyer before spinning that ridiculous theory, because plainly he hasn’t or the ones he spoke to were partisan hacks.

In fact the recusal of Supreme Court Justices is wholly a matter of their discretion.  There are times when that discretion should be exercised, and Thomas has done so in the past.  Ideally, the Supreme Court justices should as much as possible follow the Code of Judicial Conduct because every other federal judge is expected to. But nothing requires them to do so.

And there isn’t very much that Congressman Weiner could do if Thomas refuses to recuse himself.  I suppose he could draw up articles of impeachment, but does anyone think that Thomas is likely to be impeached, let alone removed, over this?

And it is highly relevant to point out that the claim is specious anyway.  They would hold Ginny Thomas to ethical standards that the code doesn’t hold Clarence Thomas to.  By the Weiner’s principles Ms. Thomas would be effectively prohibited from working since he literally thinks that any interaction with a corporation is sufficient to disqualify Clarence Thomas.  I laid it all out, previously, here, but it’s ironic that Johnson, after having speciously asserted that Jim Hoft was being sexist, would support Weiner’s sexist interpretation of the Code of Judicial Conduct.

But the truth this isn’t really about getting Thomas to recuse himself–because everyone knows that simply won’t happen (nor should it).  Instead it is about delegitimizing any decision the Supreme Court might make against Obamacare, so they can portray that as merely the product of activism.  And let’s not forget just how hypocritical it is when the left uses that term.  As I wrote in January:

And notice that term “activism.”  The correct translation when a liberal says it is “a decision I don’t like.” There is no other definition for liberals.  They don’t mind cases that overturn precedents, that overturn federal laws, and that invent rights out of thin air.  Let’s suppose for the sake of argument that the judge’s opinion is not supported by the Constitution or precedent—they have no principled objection to that.  So their objection is merely to losing.

(And over at Common Sense Political Thought, they augmented my quote with even more links, while giving high praise.)

And even if this was designed to deflate the Weiner, the fact is he was only one of seventy three Congresspersons who have signed on to this witch hunt.  Do you think you can’t find another one among the seventy two that would remain who doesn’t (allegedly) send pictures of his or her (covered) genitals in an obvious state of excitement to sexy young coeds?

Oh, wait, this is Congress we are talking about right?  So that’s a bad point on my part.

And joking aside, the irony of it all is with all the thunder surrounding Clarence Thomas, the media has barely noticed that Justice Elena Kagan has a much clearer duty to recuse based on the fact she participated in formulating Obamacare’s defense.  I mean there is that.

But in the end in order to believe the Johnson’s engorged conspiracy theories, you have to ignore the teaching of Occam’s razor: that the simplest solution is probably the best.  So why are Republicans all over this?  What’s the simple answer?  Because they do think fidelity matters.  Because they believe in the sanctity of marriage.  Because they actually think that if you break one of the most sacred promises you could make on this Earth, maybe you will be equally faithless to the oath of office.  Unlike too many liberals who have no problem with a supposed feminist who apparently serially harassed women and may have even raped one… 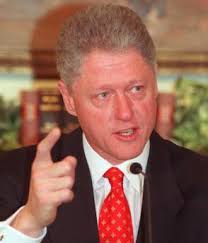 …unlike too many liberals who have no problem with a serial adulterer who was responsible for one young woman’s death—those liberals who even obscenely speculate that the victim might think his policy achievements were so wonderful that “Who knows — maybe she’d feel it was worth it.”…

…unlike those people, conservatives have a problem with immorality in higher office.  That is why generally when a Republican politician is caught engaged in sexually immoral behavior, they are run out of office.  Not every time, but far more often than the left.  It’s  not an automatic disqualifier, but is a significant concern.

(And it certainly doesn’t hurt that the scandal involves showing a penis, by a man named Weiner.  I mean that never gets old.)

Now let me pause and say that no actual sex has been proven between the Weiner and anyone besides his wife, at least since the day they were married.  But we might suspect that what we have seen so far is just the tip of the iceberg, and that over time we might learn that this was evidence of one or more secret affairs (although not necessary with any of the women named so far).  It is certainly fair to say that the Weiner appears to have a wandering eye (or twitter account), which raises further questions.  And one has to have a strange definition of fidelity to send pictures of your erect penis to another woman (if that is in fact what he did—and increasingly, it looks like he did).

The charitable theory, I suppose, is that Chaz is suffering from the fallacy of assuming everyone thinks just like him.  As I wrote in a different context (and on a different, less safe-for-work blog):

There is a tendency in people to believe that everyone is just like them.  I admit I used to fall into that mental trap myself.  I didn’t think racism existed, because it didn’t exist in my heart, so obviously it must not exist in anyone else’s.  I would say that much of our misunderstandings of a lot of issues is based on that. For instance, the average liberal has trouble understanding how backwards and evil the average islamofascist is, in part because they can’t imagine anyone thinking that differently from them.

So maybe, Chuckles, you don’t think adultery is a big deal, and thus you can’t understand why anyone else would.

But I suspect that I am being entirely too charitable with that hypothesis.  The truth, I suspect, is that this is just the latest example of how Johnson fell from a fearless seeker of truth, to a shallow shill for the left, taking his cue from the Weiner himself: gosh, we should be talking about Clarence Thomas and his failure to drive his wife out of the workplace.  And all this talk about the Weiner shot, is just part of the conspiracy to protect Thomas from the angry Weiner’s bull—- argument for recusal, or something.