Everyone Draw Mohammed Gets Help From a Familiar Source

As some of you might remember, we went through a bit of a saga about a year ago.  In my opinion, it truly started with the first time South Park confronted the controversy regarding depictions of Mohammed, with this speech:

It starts after the 1:10 mark, and for those who can’t watch for any reason, it features on character (I think Butters’ father) saying:

Freedom of speech is at stake here, don’t you all see? If anything, we should all make cartoons of Mohammed and show the terrorists and the extremists that we are all united in the belief that every person has a right to say what they want. Look people, it’s been really easy for us to stand up for free speech lately. For the past few decades, we haven’t had to risk anything to defend it. One of those times is right now. And if we aren’t willing to risk what we have now, then we just believe in free speech, but won’t defend it.

But of course in an example of bad irony and meta-humor, when the time came for them to actually put Mohammed on screen in that episode, Comedy Central refused to air it.  Seriously, watch it.  Kyle urges the fictional network executive to air it, and its like Matt Stone and Trey Parker talking to the suits as Comedy Central.  In the cartoon, freedom wins.  In life, not so much…

Then a few years later South Park brought the issue up again, and this time faced direct death threats as a result.  And Comedy Central buckled, again, so that even a speech about the importance of free speech was censored.  It was shameful.

Disgusted by all of this, a Seattle Cartoonist drew a cartoon declaring May 20, 2010 to Everyone Draw Mohammed Day.  And then suddenly she called it off.  I have evidence I won’t disclose that she was simply frightened away from it.  People on Facebook tried to take up the flag, and then put it down.  Others on Facebook stood up, and a number of bloggers did too.  And I started my own blog, yes on Blogger, called simply Everyone Draw Mohammed.  And I considered the movement as a whole to be a success.  Over 100,000 people were posting on the big Facebook page before Islamofascist hackers put a stop to it.  And we published over 700 cartoons at my site.  And a year later and I think it has been a success.

But since May 20 of last year I had frankly been too busy and neglected the site.  Every now and then I would post something, especially cross posting stuff from this site, but mostly I left it alone. And then I started getting people asking if we were going to have another Draw Mohammed day, and even sending cartoons.  I couldn’t just let them down.

So I sent out a call for help to some people I know.  Do I have to tell you that regular commenter JD leapt at the chance to help?  And likewise Dustin did as well.  And so I have handed the keys over to them and now are running it.  They are doing most of the work, frankly, and I greatly appreciate it.  They have even both contributed drawings to this site, JD being the one who drew the first of the “Dreaded Stickfigures of Blasphemy.”

Now there have been people who have objected to this all along.  I think many of the objections were addressed here and if they are not, I suppose we will just have to agree to disagree.  I think I can speak for all three of us when I say we understand where many of you are coming from and we simply don’t agree.  We weigh the factors you are considering differently than you do.

But on the other hand you may want to strike a blow for freedom yourself.  Let me assure you that it is easy.  No artistic ability is required.  Seriously, look at some of the crap we put up: 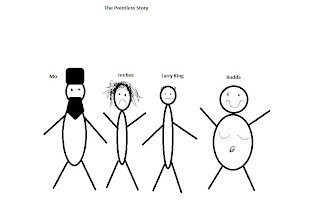 That took no talent.  But it did take courage.

…when the pillars of the media that you would normally expect to stand up for freedom of speech do not stand up, then who is left?  No one, but “we the people.”

So if you want to draw, we have only two rules:

1) You have to depict Mohammed in some way. (And taking an arrow and pointing it at something and labeling it “Mohammed” counts.)

So if you are interested in submitting something, go here and submit and you will see some fairly simple instructions.  And thank you in advance.  If you could get them in by the 20th that would be ideal, but I suspect JD and Dustin will accept them at any time.