The Damage Done by Obama’s Obstinance (Update: Isikoff and Corsi Respond and the Layering Argument)

Yeah, I’m going to start a new thread on the subject of the Obama birth certificate.  Here’s another copy of the picture:

First, I think this is the quote of the day.  We have been wondering why Obama has waited so long to release it, wondered what on Earth he was hiding…  And Instapundit might have the answer:

[R]eader Dave Converse emails: “Now that Obama has released his birth certificate, it’s clear why he waited: there was no immaculate conception!” That’s sure to disappoint some of his fans.

Second, to sum up the messy, show-your-work thread earlier today, it looks like he has released his long form birth certificate.  Now let me repeat the familiar disclaimer.  Neither I nor Patrick are birthers. But for me, it was very easy to believe that the current White House was incompetent enough to call something that was not the long form birth certificate a “long form birth certificate.”  But it sure as heck looks like another document that was identified by World Net Daily as a long form birth certificate.  Now, there were some descriptions of the document by a Ms. Fukino that didn’t quite match up what she said, but increasingly I have come to feel that maybe Patrick and I were just being two anal retentive lawyers expecting her to be more precise than many people are accustomed to being.  That being said, I do urge Michael Isikoff (or someone else) to follow up with Ms. Fukino and verify that this is what she saw, just in following the Reagan mantra of “trust but verify.”  But on the other hand, I am not holding my breath waiting for verification to happen and for now I am satisfied that it is what it purports to be.

[Update: Although I am not given permission to quote him, Carl emailed Isikoff and he seemed to indicate that he would not be following up on this story.]

On the other hand, The Smoking Gun helpfully lists some different theories that Birthers might cling bitterly to.  OMG Obama might be a twin?! (Joking of course.)

And Patrick is right to note that it is somewhat of an embarrassment how easy it was to get the certificate.  That makes everyone who claims it was impossible to release it look like idiots.  And there has been other fallout as well.  For instance, Ed Morrissey writes:

You know who the biggest loser in this might be?  CNN.  They’re in the middle of their in-depth investigation of the birther movement, and now their unaired episodes are moot.

My initial sarcastic response was that more likely Jerome Corsi would be the big loser, or perhaps all the people pre-ordered bought his book (which, funny, is ten dollars off today). 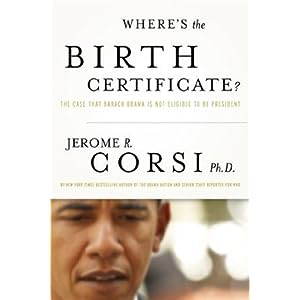 (Please use the Amazon search box on the side to pick up this book, if you are inclined to do so.  Patrick gets a nice payback if you do, without increasing the price of the book.)

It will be particularly interesting to see how Corsi responds, given that the WND post above is also by Corsi, meaning I have used his images to demonstrate that this form is most likely the long form.  [Update: Corsi responds, here.]

I am reminded years ago of reading a book on the life of Thomas Jefferson (I forgot which one) where at the end there was an essay studying where Jefferson and Sally Hemmings were at the time when each of her children were likely conceived in order to prove beyond a doubt that it was physically impossible for Jefferson to be the father of any of her children…  followed by an addendum admitting that subsequent genetic testing proved him completely wrong.  Of course no blogger who has had more than six updates on one post can mock a person too much for getting caught flat-footed by changing events, but you tend to think that when a person writes a book, as opposed to spilling a bunch of digital ink, that things are supposed to be more final, more settled and thus less susceptible to sudden obsolescence.

So I was going to write a lighthearted post about how screwed Corsi is.  And then a commenter mentioned this post,* about a person who really lost the most, and it stopped being at all funny.  Shit got real, if you pardon my French.  So, let me introduce you to a man.  This guy:

This is Lt. Col. Terry Lakin.  This is what Jack Minor writes about him:

Terrence Lakin, a graduate of University High School, is a decorated Army flight surgeon who has served in Afghanistan and Bosnia. For over a year Lakin, using the chain of command and following procedures asked superiors for assistance resolving concerns he had regarding whether Obama was constitutionally eligible to be Commander-In-Chief.

After being rebuffed and having his superiors refuse to address his concerns Lakin announced he felt he had no other choice but to disobey orders until the issue was resolved. During his subsequent court martial the jurors stated during initial questioning it was important for a soldier to be able to ask questions and have their concerns addressed.

Now you can say this guy was wrong to disobey orders (hard to argue with that, given that now he agrees).  And you can say that he expected more proof than a reasonable person should.  And you might even think that no evidence would be good enough for a Birther.  And given what we have seen with other conspiracy theorists, that might true…

But that doesn’t change the fact that if the President had released that certificate years ago, Lakin might not have gone to prison.  For all you know, Mr. President, he might have been convinced.  And yet you chose to withhold that information.

And it gets worse for Lakin:

While Lakin will be released next month his request for clemency has been denied. The denial means the findings of the court martial were confirmed. This includes discharge from the Army and loss of pay and pension. He now has two stages of appeals before the discharge becomes formal. The process could take a year or more.

So, seriously, why did you withhold this information, Mr. President?

Patrick speculated that it was arrogance.  Althouse supposed it was politics:

I’d say, the reason Obama did not release the long-form birth certificate before is that he thought it was to his advantage to allow other people to look bad or crazy in one way or another by going on in the birtherist mode. But there was a tipping point, as Trump got traction and polls showed huge numbers of American’s entertaining doubts. So, it was all political strategy. You could criticize Obama for wasting our time by not just releasing the damned thing earlier. But he could have thought it was demeaning to have to do this, so I’m inclined to give him a pass.

And if the fallout was purely political, and few reporters and writers getting egg on their faces, I might give him a pass, too.  But instead it might very well have cost Lt, Col. Lakin his freedom.

And no, I am not giving him a pass on that.

So, bluntly, Mr. President, you should grant him a pardon, cleaning out his record as honorably discharged and giving him his pension, perhaps on the condition that he publicly admits you are eligible to be President.  It’s the least you can do.

Update: A lot of people are asking about the layers supposedly present in the pdf.  I didn’t mention it because honestly I didn’t even understand it.  And I still don’t.  I don’t play around with photoshop and the like.  But here is the National Review’s take on the issue.

However, I will take them to task on the claim that it is unlikely that anyone would make such a rookie mistake when forging a document.  Let’s not forget that the person who forged the Rathergate documents apparently didn’t even bother to use a typewriter, thinking we wouldn’t know the difference if it was a computer.  Also I remember a few years ago when the military released a classified document in word format, using the highlight feature to redact information.  The only problem is that any person could just highlight the blacked out areas, press Control-C and paste the forbidden words in another document.  So, yes, people are exactly that stupid.  That is indeed why I don’t believe in most conspiracy theories–because they require a level of omnicompetence unlikely to occur in reality, especially if the government is involved.

But their point about adobe doing it on its own seems reasonable enough.

* Yes, I know that post goes a little over the top with werewolf silliness, but its central point–that it was irresponsible of Obama not to release it sooner and Lakin potentially paid the price for that decision–is valid.

304 Responses to “The Damage Done by Obama’s Obstinance (Update: Isikoff and Corsi Respond and the Layering Argument)”