What will the voter fraud denialists say about this?

The New Mexico secretary of state’s office is cross checking the state’s voter rolls with a list of thousands of foreign nationals who have been issued driver’s licenses.

The work is far from done, but Secretary of State Dianna Duran testified during a House committee Tuesday that the review has turned up evidence of foreign nationals obtaining a license, registering to vote and casting ballots.

In case you were wondering, that’s not supposed to happen.

A spokesman for Gov. Susana Martinez, Scott Darnell, says the initial report from Duran’s office should concern every New Mexican.

He says every illegally cast vote disenfranchises a New Mexican and this is another reason why the governor wants to stop issuing licenses to illegal immigrants.

Under a 2003 law, the state has issued more than 80,000 driver’s licenses to foreign nationals, including illegal immigrants.

There seems to be very little coverage of this.

I have been sounding the alarm on voter fraud by illegal immigrants for some time now. Immediately after the disastrous election of Obama, I wrote:

Several days ago, I asked you: “What do you think is the single greatest source of voter fraud in this country?” To me, the answer is obvious and intuitive: votes cast by illegal immigrants.

We all know that these illegals do much of what citizens do: drive, work, receive health care, etc.

Why wouldn’t they vote, too?

It certainly seems logically possible that there were hundreds of thousands, if not millions, of illegal votes cast in this past election. If this is true, it is possible that illegal immigrants decided this election.

I have also discussed the problem here (responding to ACORN apologist Peter Dreier) and here (discussing the increasing worthlessness of your vote).

The problem is not limited to illegal immigrants, by the way — they are just the most egregious example of non-citizens voting. Indeed, it doesn’t even have to be the case that the non-citizen intends to defraud the system: some think they are entitled to vote.

We don’t know what the numbers will be in New Mexico. We will keep a close eye on this and report the numbers when we hear them. (Keep in mind that this review will catch only fraud by foreign nationals who have gotten a driver’s license. The fraud could be much more widespread than this review will reveal.)

Every state should be doing what New Mexico is doing. It’s an easy and undeniable way to attack voter fraud on a wide scale. That is, if you think voter fraud matters. Me, I do. Because it carries the potential to cancel out my vote in favor of someone who has no right to cast a ballot.

If California ever tries to conduct such a review, prepare yourself for the cries of profiling! and racism! But really, absent such cynical and dishonest arguments, is there any reason not to do this?

Headline of the Day: “Snake Dies From Silicone Poisoning After Biting Model’s Breast During Photoshoot”

This qualifies as almost too funny/horrifying to check:

It should have been an alluring photoshoot between two of nature’s beautiful creatures as a model wrapped herself in a snake.

But surgically enhanced Israeli model Orit Fox got more than she bargained for when the massive boa constrictor took objection to her over familiarity and reacted by biting into her breast.

However, it was the snake who came off worse because, while Ms Fox need a tetanus shot in hospital, the reptile later died from silicone poisoning.

Indeed at the link the Daily Mail uses stills to give you the, um, blow by blow as she plays with the snake and then it bites her.  I do have to dispute the claim that this involves “two of nature’s most beautiful creatures.”  Hey some people like snakes and I’ll give them a mulligan on that, but on the other hand, I have yet to find a picture of Fox that didn’t make her look like bleached horror.

And of course we have video:

But that all being said, this might be arguably too funny to check, but, um, are we sure about the snake dying?  The silicone is that dangerous?  This sounds like a joke someone told about the incident, perhaps converted by bad translation into a reported fact, much like the infamous incident when a reporter told a joke about Dan Quayle and it was accidentally reported in a newspaper as a real event. So color me skeptical on that part.

This is highly questionable ethically.  You see apparently Obama is actually an employee of O’Keefe’s and the entire Obama administration is an O’Keefe prank that just went too far:

[Press Secretary Jay] Carney said the scam entailed pulling together demographic, social, cultural, and policy characteristics to create the most exaggerated Democratic candidate possible without stepping over the line into caricature.

“By combining empty, touchy-feely slogans like ‘hope’ and ‘change’ with far-left-wing policy planks and presenting them in the person of a racial minority from a major Midwest city with an Ivy League background, we thought we might be able to make a good showing in Iowa and New Hampshire, maybe even capture the Democratic nomination,” Carney told reporters. “But the entire country? No. We never, ever for even a second imagined the American people would elect someone who had served only half a term in the U.S. Senate to be the leader of the entire free world.”

“All you guys in the press were so giddy about it,” Carney continued, “we couldn’t really just announce that the whole thing was a big fat joke, you know? I mean, how would that look?”

Contacted by phone, O’Keefe said he, too, was surprised the hoax had lasted as long as it did.

Now there are some people who have suggested that this Reason piece is itself just satire, that in reality Obama was a genuine liberal candidate and not at all a parody of liberalism.  But I ask you, can you point to any clear evidence that the Obama presidency is not just an elaborate joke?  I mean come on.  He bowed to the King of Saudi Arabia and his handlers attempted to deny it (okay, in truth, he bent his knee so technically that was a curtsy).  British Prime Minister Brown gave him a penholder carved from the wood of a ship used to stop slave ships, a priceless historical artifact.  Obama gave him a collection of DVD.  And they were region locked—so literally Brown couldn’t even watch the movies at home.  And then he gave the Queen of England an Ipod.  And he filled it with his own speeches.  And the two books he wrote about himself, the racist preacher, the beer summit and so on.

I mean come on, if they were serious about this what evidence can you show to prove it?

Michelle Malkin’s cousin Marizela Perez is still missing.  She has been missing since Saturday, March 5.  And yes, I am sure Michelle Malkin is well aware of the implications of it being ten days.  I am sure at this point she would appreciate your prayers, if you are the praying type.  And again, keep your eyes open and go to Malkin’s site and see if there is anything you can do to help.

The Hate That Killed Hadas Fogel

We have had earthquakes, tidal waves, possible meltdowns (and that’s just at Charlie Sheen’s house), Libyan rebellions and even March Madness (the non-Sheen kind).  So some stories that have deserved to be talked about have been pushed by the wayside.  One of them is the story of Hadas Fogel.  Here is a picture of her: 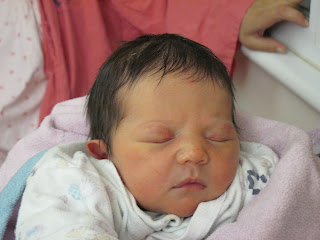 And here is a picture of her body being taken from her house (source).

This beautiful three month old girl was murdered last Friday.  She was stabbed in the heart and decapitated while she slept.  And those who killed her killed four more members of her family, in their sleep, for the “crime” of being settlers.  Each of those murders were unjustified, but I am highlighting Hadas’ murder because the fact that she was a baby–probably not able to even walk yet–provides clarity.

It is fashionable in some circles to excuse Palestinian terrorism as being motivated by injustice.  But the intentional murder of Hadas Fogel, or Shalhevet Pass before her, cannot be justified by any appeal to a supposed injustice.  As I wrote a few months back:

[I]t’s important to remember the cruelty these “human rights advocates” engage in.  There is no reason to intentionally murder a baby, unless you believe that there is something about that child that makes him inherently evil.  They don’t kill Jews because of anything they have done to them.  They kill them out of irrational hate—simply because they are Jews.

The murder of babies gives lie to the claim that Palestinian terror is motivated in their violence by anything but jew hate, pure, simple and ugly.  And lest you think that this is an isolated incident, there is this:

Gaza residents from the southern city of Rafah hit the streets Saturday to celebrate the terror attack in the West Bank settlement of Itamar where five family members were murdered in their sleep, including three children.

Residents handed out candy and sweets, one resident saying the joy “is a natural response to the harm settlers inflict on the Palestinian residents in the West Bank.”

They cheered in Palestine on 9-11.  They cheered the murder of a baby on March 12, 2011.  This should awaken the conscience of the people of Palestine.  But instead their culture is this hateful—that they would celebrate the death of a baby, as though the baby did any harm to them at all.

Greg Packer occupies an odd place in Apple lore as a man who makes it his job to be a line-sitter. Despite camping out for several nights to grab the first original iPad in New York, Packer got bumped by blogger Richard Gutjahr because Packer forgot to reserve his iPad (Apple was accepting pre-orders and reservations), according to Cult of Mac. Packer was king of the queue for the original iPhone — but fell short the second time.

Note to Greg: please stay on top of these matters in the future. I need to believe.