“Keith Richards?  You have really let yourself go…”

Events are moving fast but this Daily Mail account is promising:

Protesters appear to have gained a foothold in Tripoli as banks and government buildings were looted while demonstrators have claimed they have taken control of the second city Benghazi.

It is thought up to 400 people may have died in the unrest with dozens more reported killed in Tripoli overnight as protests reached the capital for the first time and army units were said to have defected to the opposition.

Read the whole thing.  And of course Hot Air has all over this in this post, too.  And we have this report of the Libyan military bombing protesters?

And I will note something to our special forces community.  Abdelbasset Ali al-Megrahi, the Lockerbie bomber who was released to Libya because he had cancer and was only expected to live another 3 months, but who failed to live up to his obligation to die on time, is still alive over there.

This is a picture of him. 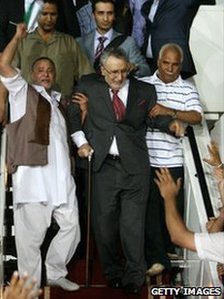 Just thought maybe you should pay him a visit…

38 Responses to “Gaddafi Has Fled Tripoli?”