Update: My post providing the promised for supporting documents is up and here.  I purposely bumped it back  so that it wouldn’t appear until after even Patterico’s post on Think Progress’ latest dishonesty.

Update II: And thanks to Ed Whelan for the link back.

On Friday, in the letters section of the New York Times, Bruce Fein, Esq. wrote the following:

Justice Antonin Scalia galloped beyond the farthest boundaries of judicial propriety in secretly meeting on Capitol Hill to discuss the Constitution with Tea Party members of Congress saddled with a co-equal duty to assess the constitutionality of legislative action.

Now James Taranto and Ed Whelan have done admirable jobs deconstructing the inaccuracy of that letter.  Simply put, the meeting was not secret, it was not limited to Tea Party people only, and there is absolutely no evidence that Scalia discussed the constitutionality of Obamacare or anything related to any case likely to come before the Court.  But Fein goes on to lecture Scalia about the supposed lack of ethics of it, and given what I knew about the man, it was a bit much.

But I have to rewind a little and tell you about another man.  This man: This is Ephraim Chukwuemeka Ugwuonye, Esq.  I came to know about him when a colleague contacted me with an ethical conundrum posed by this man’s conduct and much of what I will tell you will come from that friend, although I verified all of the information myself.  Mr. Ugwuonye sometimes shortens his middle name to Emeka, and sometimes uses that middle name as if it was his first name as you will see.  Mr. Ugwuonye is a first generation immigrant from Nigeria.  He is also a graduate of Harvard Law School.  And at one time he was admitted and in good standing in Maryland, New York, and the District of Columbia as an attorney.

But in 2008, he was suspended in Maryland for ninety days for various forms of misconduct.  The case is, well… colorful and worth a read through.  You can read it all here, but it comes down to two major complaints.  In one instance, he allegedly promised to just file a suit for wrongful termination—that is, to file it for tactical purposes and then let it die.  The client disputed that point, claiming that he was promised that his case would be taken to fruition.  Regardless, he failed to communicate with his client after he got notice after notice telling him the case was dying of neglect, and eventually the case was dismissed with prejudice.  Which means that if there was any merit in his claim, he had flushed it down the toilet with neglect.  In that incident he was charged with having failed to provide timely communications with his client.

The second incident discussed in that case involved taking too much money for a frivolous case.  Namely he took $3,500 to take the case of a man who claimed that Montgomery County (Maryland) Crime Solvers owed him a total of $25,500,000.  Five hundred thousand of those dollars was allegedly owed for helping to catch the D.C. Snipers, which is stretching plausibility, but its within the realm of possibility.   As for the $25 million, his client asserted that he earned that by helping them find Saddam Hussein.  Mind you, he felt that the Montgomery Country (Maryalnd) Crime Solvers owed him this money.  In footnote thirteen, the court notes dryly: “Saddam Hussein was captured on 13 December 2003 in the cellar of a farmhouse located near the town of Tikrit in Iraq, a location of some distance from Montgomery County, Maryland.”  The Court’s point was to argue that you didn’t need $3,500 to figure out that the man’s case was worthless and thus that fee was excessive and unreasonable.

END_OF_DOCUMENT_TOKEN_TO_BE_REPLACED

You know who actually wrote well about this?

Like his State of the Union, this budget is good short term politics but such a massive pile of fiscal bullshit it makes it perfectly clear that Obama is kicking this vital issue down the road.

To all those under 30 who worked so hard to get this man elected, know this: he just screwed you over. He thinks you’re fools. Either the US will go into default because of Obama’s cowardice, or you will be paying far far more for far far less because this president has no courage when it counts. He let you down. On the critical issue of America’s fiscal crisis, he represents no hope and no change. Just the same old Washington politics he once promised to end.

The difference between Sullivan and me is that Sullivan appears to be surprised.

Scattered News on Democracy Movements in the Muslim World

Well, for starters, it looks like a number of items have been stolen from Egypt’s museums, including this piece depicting King Tut: 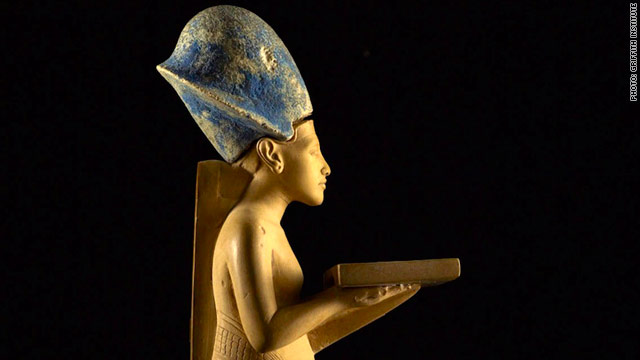 Which needless to say is very sad, because they were priceless national treasures.  Hopefully, the culprit can be caught quickly and spayed.  You can read about it (the theft and not the spaying), here.

At the same time, the military has officially suspended their constitution and suspended parliament until elections can be held.  As I said before brief periods of non-democracy can occur before establishing democracy.  But we should be appropriately cynical that the military will actually step aside when the new government is elected.  You can read about that, here.

Meanwhile Mubarak’s supporters are suddenly pretending to be revolutionaries.  So the fleas and ticks have officially chosen a new dog.  You can read about it, here.  The best comedy in the piece is depicting the editor of a state run newspaper:

It was only last week that Saraya was denouncing the chaos caused by pro-democracy demonstrators. His editorial in al-Ahram on Sunday carried a very different tune.

“A salutation to the revolution and respect to its youth,” Saraya wrote. “The corrupt in Egypt were only a few that led to the destruction of the country, and their era is gone now.”

For more on how military rule is shaping up, in this article they are mentioning the potential for the outlawing of strikes, and, on the other hand, proposing constitutional amendments within a few months.

In more unambiguously hopeful news, there are protests again in Iran?   END_OF_DOCUMENT_TOKEN_TO_BE_REPLACED

Think Progress Makes a Martyr Out of Brad Friedman, While Censoring Any Mention of His Business Partner, Convicted Bomber Brett Kimberlin

[Welcome, Instapundit readers! This post has information about the anti-speech thuggery of convicted bomber Brett Kimberlin, and his business partner Brad Friedman, against me.]

Think Progress published parts of internal Chamber of Commerce e-mails talking about Friedman. But what Think Progress hides from you is that the Chamber was actually primarily interested in Kimberlin. They described Kimberlin as having “a bit of a checkered past and has been associated with some more radical and violent activities.” That’s a pretty mild description of a guy who set off several bombs, one of which blew off a man’s leg. Meanwhile, they were very kind to Friedman, describing him as “much more mainstream” and someone who “can often be seen on many of the political talk shows.”

Their focus was Kimberlin. But Think Progress cut out any mention of Kimberlin. Entirely.

Luckily, you have me here to tell you what Think Progress won’t.

END_OF_DOCUMENT_TOKEN_TO_BE_REPLACED

This post is not meant to have any substance, except to serve as a repository for a set of documents supporting another post entitled Questions About Bruce Fein’s Ethics.  Basically my colleague, who shall remain anonymous, printed out each and every one of these pages in preparation or a complaint to state and territorial agencies. I can verify their veracity because I looked at the same time at or about the same time he did.  The website’s contents were exactly as depicted here, with minor changes for reformatting which occurs automatically when one prints out from the internet.  And as you can see, some of it is cut off, as also often happens when you print out from the internet.  He turned many of these documents sideways because that often created a cleaner copy.

The first four pages are from the Attorney Profiles page of the ECU Law website.  Its worth noting that Mr. Fein makes an appearance on these pages, too.