Before I get down to bitch-slapping Charles Johnson for his latest dishonest attacks on me, I want to make sure you see this December 2010 entry from the guys at Diary of Daedalus, in which they catch Johnson calling Kos a “craven coward” for blocking the Wayback Machine and Google Cache . . . and then prove he has subsequently done the same.

Because he has a lot of history to scrub, ya know. Go, read their post. Go, go! I’ll still be here when you get back.

You back? Good. On to my own fisking of Charles’s latest dishonesty:

Patterico and the echo chamber of wingnut blogs that linked to him are trying to make excuses for Glenn Beck, by setting up an obvious straw man — that I claimed Beck was telling his audience to go out and shoot people in the head — and then knocking the straw man down. But the simple truth is that I didn’t say or imply this at any time, and neither did the writer of the LGF Page that contained the video.

Right. You merely called his statements a “vile threat”:

You also called them a “crazed, incoherent rant”; “disgusting comments”; and “completely freaking insane.” And you also suggested there was no context that could explain the comments:

And you said I was “making excuses” for a “disturbing, incoherent rant involving shooting people in the head”:

But you weren’t implying that Beck was calling for violence — oh, no! Not at all!

Do you realize how transparent you are??

See, to me — and I bet to others! — the above kinda suggests that you did strongly imply Beck was issuing threats and calls for violence. But I also gave you plenty of opportunities to explain what you really thought he meant, and repeatedly asked you for your interpretation. And here are the kind of messages I got in response.

And insinuations that you would go after my job:

In other words, standard gambits from the Leftist Playbook, taken from the chapter “Things to Say When you Have No Argument.” (It’s a hell of a big chapter.)

With every passing day, the left attempts to recharacterize standard political rhetoric as violent — even as we learn more about real violence on the left . . . violence that Big Media has chosen to hide from our view.

Power Line notes how the New York Times is publicizing a letter from the Center for Constitution Rights which seeks to muzzle Glenn Beck for telling the truth about Frances Fox Piven. As Power Line notes, Piven has engaged in rhetoric supportive of violence; Beck has pointed that out; and this supposedly means that Beck is responsible for a handful of anonymous Internet threats on her life.

Meanwhile, people lie about Sarah Palin, creating an explosion of death threats against her, and that doesn’t rate concern from the Center for Constitutional Rights or the New York Times. (Thanks to Dana for that point.)

Now, what was Glenn Beck warning about besides Piven? Oh yes: violence by radical leftists against Democrat politicians. Which leads me to the next topic:

On his blog, reader Mike K. alerts us to a real assassination attempt that you probably never heard about. A fellow named Casey Brezik stabbed a college dean in Kansas last September, but thought he was stabbing Missouri Governor Jay Nixon.

Turns out the would-be assassin, while possibly mentally disturbed, was also one of these Marxist revolutionaries Beck was warning about. Lisa Graas wrote:

In fact, a quick overview of Brezik’s Facebook page, which I found easily by doing a simple Facebook search for his name, shows that he is not just some pot-head college student. The picture at the top of this article was posted in Brezik’s profile with the Guevara quote: “A true revolutionary is guided by great feelings of AMOR!” Brezik also appears to be sympathetic to Fidel Castro saying in regard to the former leader of Cuba’s statement on war, “Is this not to be takin [sic] seriously?” . . .

Brezik is best described as an active anarcho-communist who had a fascination with Che Guevara and was concerned about world poverty, capitalism and the environment. He was so concerned, in fact, that he opted to act exactly as Che Guevara did — as an executioner.

Brezik has been discussing the possibility of using radical activity to bring about the change he was looking for. Only one of his 26 Facebook friends engaged him on the issue while the rest either didn’t see his comments or ignored them.

And from the American Thinker:

In his “About Me” box on Facebook, Brezik listed as his favorite quotation one from progressive poster boy, Che Guevara. The quote begins “Our every action is a battle cry against imperialism” and gets more belligerent from there.

On his wall postings, Brezik ranted, “How are we the radical(s) (left) to confront the NEW RIGHT, if we avoid confrontation all together?”

As good as his word, Brezik’s marched on Toronto in June 2010 to protest the G20 Summit, where he was arrested, charged, and deported. “MISSION ACCOMPLISHED,” he boasted.

Like many on the left, Brezik seemed to have found religion.

In reference to an article about Terry Jones and his proposed Quran burning, Brezik posted on the day before his planned assault, “This is now a Holy war. Scriptures have been desecrated. War U can’t handle. Make a choice and quick.”

News to you, right? To me, too. For example, the L.A. Times never printed a word about this assassination attempt, in their print edition or anywhere else.

Oh — and did I mention? His intended target was a Democrat.

Why, it’s almost as if Glenn Beck had a point when he said that self-described leftist revolutionaries may turn on their own with violence!

But by all means, let’s pile on Glenn Beck for telling such truths, while ignoring the lies that endanger Sarah Palin’s life. It’s all part of the “New Civility.”

Lang Lang the pianist says he chose it. Chairman Hu Jintao recognized it as soon as he heard it. Patriotic Chinese Internet users were delighted as soon as they saw the videos online. Early morning TV viewers in China knew it would be played an hour or two beforehand. At the White House State dinner on Jan. 19, about six minutes into his set, Lang Lang began tapping out a famous anti-American propaganda melody from the Korean War: the theme song to the movie “Battle on Shangganling Mountain.”

The film depicts a group of “People’s Volunteer Army” soldiers who are first hemmed in at Shanganling (or Triangle Hill) and then, when reinforcements arrive, take up their rifles and counterattack the U.S. military “jackals.”

Read the whole thing, if you have the stomach for it.  Of course this wouldn’t be the first time the Obama White House had inadvertently aired Chinese propaganda.

Still it makes this photoshop all the more appropriate: 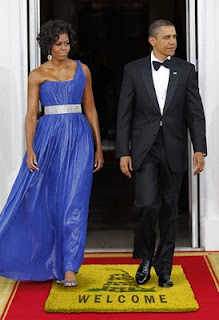