I thought Professor Bainbridge was the guy who is embarrassed to be a conservative, much less a Republican.

Maybe he should express his thoughts about presidential candidates from a party that he is willing to admit being a member of . . . as he discusses politics at his faculty cocktail parties.

I understand there is this guy Barack Obama who is just splendid — why, you can ask any of the professors!

No, Charles Johnson, Glenn Beck Did Not Tell His Viewers to Shoot Anyone in the Head

He links to a post, evidently written by an LGF user, which provides no context for the clip, but simply embeds it. Here is a screenshot of the entire post:

And here is the short and misleading video the post embeds:

Now, here is the context Charles and his blogger omit.

The full transcript is here. When you read it, you will see that the word “you” refers to the leftist politicians in Washington and their pals in the media, and “they” refers to their radical leftist friends — who, Beck warns, actually believe there must be violent revolution . . . and if they don’t get what they want, they may start one.

Beck is warning the comfortable pols that the people who put them in power aren’t going to be satisfied with seeing just a little of their agenda accomplished. They want it all. Because they are revolutionaries at heart — people who have called for violence and never repudiated it. And if they aren’t satisfied, Beck tells the pols, they will come after you. Violently.

You’re going to have to shoot them in the head. But they may shoot you.

Johnson wants you to believe that the “you” is Beck’s audience, whom Beck is inciting to violence. Nothing could be further from the truth.

But Charles Johnson doesn’t care about context or truth any more.

Now that this video has surfaced, expect it to spread like wildfire. Be prepared, with this post and the linked transcript, to rebut the lies.

UPDATE: Thanks to Instapundit for the link, and welcome to new readers. Please note also Stacy McCain’s post on the same topic.

It gets better! Now leftist Brad Friedman is complaining about Beck’s rhetoric — despite the fact that Friedman’s business partner is a convicted bomber who blew off a guy’s leg.

I’m kind of reluctant to talk about this, because as you will see in a moment, by talking about it I am possibly feeding the problem I am trying to kill.  But still, I read over at the Blaze that Fox TV will not be airing an ad from a pro-infidelity website called Ashley Madison.

Now let’s back up right there, and point something out.  The Blaze is a website created by Glenn Beck to cover various interesting stories and I do enjoy it a lot.  It doesn’t appear to be officially corporately affiliated with Fox or Fox news, but it is affiliated with it in the sense that it is founded by a major Fox News personality (Beck).  Which makes it all a bit much for them to write this and praise Fox’s standards.  Why?  Because Fox News advertises for Ashley Madison all the time, airing ads like this:

My Marriage Matters from Ryan Hill on Vimeo.

I mean this is exactly like a man getting up and saying, “Kids, you should not smoke cigarettes.  Especially not Marlboros, which are the choice of rugged cowboys and have a soothing menthol flavor.  No sireee, don’t you even think about smoking a smooth, cool Marlboro, the choice of rebels and cowboys.”  At best you have to think this spokesman is an idiot, but at worst you have to suspect the guy is full of sh-t and is actually trying to duck around bans on cigarette ads.

The same problem is presented by this My Marriage Matters shtick.  Notice how he stresses that Madison will guarantee you a discreet affair.  And then repeats it. And if you actually go to the site all you see is a repeat of the ad, and a link to a petition.  Um, really?  You think that if a whole bunch of people sign a digital petition, that the people making this pro-cheating website will cry their eyes out and fold up an otherwise profitable business?  Do you think they are capable of shame?

Do you think these are rhetorical questions?

No, to a company like this publicity is oxygen. So the best strategy is to deny it publicity and thus suffocate it, if you don’t mind the violent rhetoric.

But it gets even worse.  You see, if you look at some of the links you start to see extremely powerful evidence that the “My Marriage Matters” site is a scam.  Namely, a site called Monogamy Movement makes a compelling case that MyMarriageMatters.org is a front for Ashley Madison.  And Above the Law adds some additional evidence, such as old screenshot where this supposedly anti-Ashley-Madison site links to Ashley Madison.  Heh.

Which of course brings me to my dilemma, because, well, now I am giving this stupid site publicity, too.  Oh well, all I can hope is that if enough people bring this up Fox News and other networks will stop airing this alleged anti-Ashley-Madison ad.  Even if by some miracle it is not a sham, the fact is it is doing more harm than good.  Now if they want to re-cut the ad so it doesn’t promote the cheaters’ site, I would be cool with that.  But I ain’t holding my breath.

By the way, I think a cheater’s site like this is the best argument yet for bringing back the tort for alienation of affection.  That is the cause of action, abolished in most states, which allows a spurned spouse to sue the other woman or the other man, as applicable.  (It is notable that this cause of action still exists in North Carolina, where John Edwards lived. Just sayin’.)  I don’t know if that traditional cause of action could be extended to an infidelity-facilitating site like this, but I think it should be.

This is Dr. Michael Lemole. 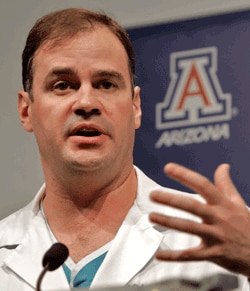 You probably have seen him as part of the team of surgeons and specialists who have been helping Representative Giffords.  One can only speculate how much of this is due to luck, divine intervention, the natural pluck of Ms. Giffords or the skill of this team, but considering that this woman was shot in the head, she is making remarkable progress and he probably deserves a chunk of the credit:

Rep. Gabrielle Giffords’ remarkable progress, including standing up with the help of aides Wednesday, bodes well for her continued recovery at a Houston rehabilitation center, where she will be moved Friday, just 12 days after a bullet pierced her brain.

Latest reports from University Medical Center in Tucson indicate that the Arizona congresswoman is able to move both hands and communicate with those around her, although it is unclear if she can speak. All this indicates a high level of motor and emotional function, experts say.

I mean seriously, did anyone think that things would be going so well twelve days ago? And you can read a lot more about the team and what they are doing, here.  Its all interesting reading that I recommend.

So they seem to be doing well, and therefore we must…  investigate Dr. Lemole.  In fact not just Dr. Lemole, but his parents, too.  At least that is what Jose Lambiet of the Palm Beach Post thinks.  Today he has published a column exposing that his parents are (gasp) rich:

Lemole’s mom and pop, heart surgeon Gerald Lemole and his wife, Emily, live in a $7.1 million house on The Island.  [A.W.: the least creative name for an island, ever.]  They also own a more modest $3.5 million house, also in Palm Beach.

He says all of this like its a bad thing.  But if you needed heart surgery, which would you prefer?  A rich doctor or a poor one?  In my book pointing out that a guy is a rich doctor is a compliment.  He is likely to be rich for all the right reasons.

Oh, and if you thought that was dumb, it gets dumber.  Waaay dumber.  Jose continues:

And while Michael is saving the life of the moderate Democratic congresswoman, Gerald and Emily are more into the far, far Right — including Tea Party goofball Christine O’Donnell!

END_OF_DOCUMENT_TOKEN_TO_BE_REPLACED

This is so silly, specious and attention-seeking I am tempted to ignore it.  But I guess I agree with Palin’s implicit logic that a smear has to be answered, so here goes.

So this morning the New York Times publishes more or less a press release, reworded, asserting that (gasp) Justices Scalia and Thomas might have had a conflict of interest.  The theory goes like this.

Every year there is a retreat to discuss policy and politics held by the Koch brothers, a pair of industrialists that apparently the left is trying to set up as the right wing George Soros.  And in a recent letter they mentioned that Scalia and Thomas had spoken sometime in the past at one of these events.  You can read a purported copy from Think Progress, here.

So a liberal anti-freedom group called Common Cause has sent a letter to the Department of Justice seeking to have them investigated.  Specifically they suspect that Scalia and Thomas were paid money by a corporation.  Not that this corporation was a party to the case, but still this corporation is very active in politics and thus benefited from Citizens United.  Therefore, they believe they should have disqualified themselves in Citizen’s United, and for that reason the decision should be vacated.

Um, for what?  The Code of Conduct for United States Judges specifically says that federal judges are allowed to speak, even for compensation:

Complete separation of a judge from extrajudicial activities is neither possible nor wise; a judge should not become isolated from the society in which the  judge lives.  As a judicial officer and a person specially learned in the law, a judge is in a unique position to contribute to the law, the legal system, and the administration of  justice, including revising substantive and procedural law and improving criminal and juvenile justice.

Obviously it is possible for this kind of advocacy to compromise impartiality, but these Common Cause morons seem to think we should assume it is a problem.  That is wrong.

But, Common Cause would argue, they are being potentially paid by a corporation and every corporation benefitted from Citizens’ United, therefore somehow that adds up to bias.

END_OF_DOCUMENT_TOKEN_TO_BE_REPLACED

House Republicans passed a largely symbolic resolution Wednesday to repeal the nation’s new healthcare law, fulfilling a top campaign promise and setting the stage for a renewed battle in the Senate.

Not so.  It is a bill. If passed by the Senate and signed by the president, it would repeal ObamaCare.

Don’t believe me? Read it yourself, here (.pdf).

Does nobody at this newspaper understand the difference between a resolution and a bill???

Thanks to Adam B.