Obamanomics is a Disaster

If this Doug Ross post came with labels, they would be Cloward-Pivens, Deficit, and Disaster:

“The Cloward-Piven tactics of the Obama administration have borne fruit.
***
Everything Obama’s doing is obvious: implementing a value-added tax, throwing sludge into the economy, transforming the society, rejecting the limits in the Constitution, cramming liberal activists throughout the judiciary, massively expanding the federal bureaucracy, and moving rule-making power to unelected bureaucrats. 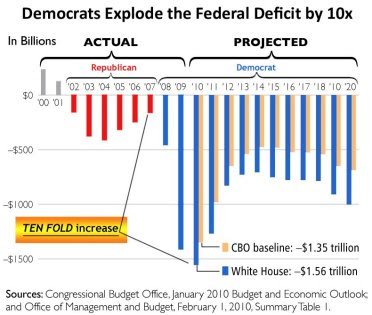 Democratic Congressman Hank Johnson, who succeeded Cynthia McKinney in office, is worried Guam “may tip over and capsize:”

The second best part is the Naval officer’s measured response that “we don’t anticipate that.”

Allahpundit says this about Congressman Johnson:

“Via Weasel Zippers, a clip that’s destined to be viral by tomorrow morning. Even so, go easy on him. Yes, he was an Iraq defeatist, and granted, he demagogued Joe Wilson’s outburst in the scummiest way imaginable, but he’s also a guy with a serious illness that affects his mind (“he regularly gets lost in thought in the middle of a discussion”). Although if that’s what’s going on here, a polite question for Madam Speaker arises: What’s he doing at these hearings instead of resting?”

I also won’t belabor the point if Rep. Johnson is a sick man, but it’s entirely appropriate to ask Democratic leaders why they don’t do something. If they don’t, then clearly Democrats view a reliable vote as worth more than mental competence in America’s federal officeholders.

In other words, this is the attitude that Democrats expect from Americans:

“Thank you, sir, may I have another?“

“Unexpected” is fast becoming the most overworked word of the Obama Administration, and that’s saying something in a White House that prides itself on never-ending rhetoric. Today’s “unexpected” news is an early report showing a decline in March private sector unemployment numbers. Scott Jacobs has more on this story at The Jury.

An Update About Technical Matters

You’re in trouble when I’m writing a “technical update” because this isn’t my field. Nevertheless:

1. A lot of work has been done but there is still tweaking being done to resolve lingering performance issues. It would help if you could leave comments on this thread advising of any problems — including things like slow loading, error messages, and coding issues. That would help us pinpoint when the problems occur and what issues are still unresolved.

2. For now, comments post in a slightly different way than before. Comments appear immediately but at first they will look different to the author than to others. Until you refresh the page, your comment appears without formatting and shows the author as “You,” regardless of your screen name. Since readers must refresh the page to see new comments, your comment will always appear to others with formatting and your screen name. And while we’ve requested that this feature be changed back to the way it was before, we’ll have to wait and see.

3. The strike code has been corrected.

Thank you for your patience and for continuing to visit and comment.

“As unemployment stubbornly sticks near 10 percent and any sort of economic recovery seems a long way off, think about this: The one part of the economy that’s going gangbusters is government work.

Indeed, since the Great Recession started in December 2007, over 8 million jobs have been lost in the private sector while the public sector has added at least 100,000 positions. It’s time to recognize that public-sector employment is killing the economy for at least three reasons.”

The three reasons are:

1. They cost too much.
2. We can’t fire them.
3. They create a permanent lobby for expanded government and higher taxes.

Not convinced? All you really need to see is this chart posted at Hot Air.

Barack Obama announced he plans to open up millions of offshore acres to oil and gas drilling:

“President Obama took a gamble with the environment and his political base yesterday, opening up 167 million acres (67 million hectares) of coastal waters to oil drilling, in an attempt to limit America’s dependence on foreign energy and to win Republican backing for a stalled climate change Bill.

In a reversal of policies that have protected American shorelines since the Exxon Valdez disaster in 1989, Mr Obama paved the way for a new energy rush off the US Atlantic and Gulf coasts by allowing exploratory drilling for trillions of cubic feet of natural gas and oil reserves that could exceed eight billion barrels.”

So what’s Obama doing? For one thing, he’s angered his environmental base and no matter what his supporters claim, he validated Sarah Palin’s “Drill, Baby, Drill.” (I think that proves Obama doesn’t see Palin as a 2012 opponent.)

Obama also undermined his June 2008 claim that drilling won’t help solve our energy problems and went back on his campaign promise not to allow offshore drilling:

OBAMA: “So let me just repeat. John McCain’s proposal, George Bush’s proposal, to drill off-shore here in Florida and other places around the country would not provide families with any relief — this year, next year, 5 years from now. Believe me, if I thought there was any evidence at all that drilling would save people money who are struggling to fill up their gas tanks by this summer or next year or even the next few years, I would consider it. But it won’t. *** When I’m President, I intend to keep in place the moratorium here in Florida and around the country that prevents oil companies from drilling off Florida’s coast.”

Like Johanna Neuman at the Top of the Ticket, I think Obama is laying the groundwork to peel off some GOP support for climate change legislation by repositioning himself on offshore drilling — something championed by McCain-Palin, not Obama-Biden. Given the Republicans’ reaction, I bet it will work.

UPDATE: In the comments, Beldar takes me to task (here and here) for describing Obama’s announcement as “Drill, Baby, Drill.” He makes a convincing argument that this is Obama’s typical empty rhetoric by which he bans drilling in Alaska’s Bristol Bay and issues vague promises to allow drilling elsewhere. My point is that if Americans think Obama is allowing drilling, it doesn’t matter whether he actually does or not.

El Paso Jail Guard May Have Been Target in Juarez Deaths

The AP has more details on the target of the recent murder in Juarez of two Americans — U.S. Consulate employee Lesley Enriquez and her husband, Arthur H. Redelfs, an El Paso jail guard — and a Mexican citizen married to another Consulate employee. The report indicates Redelfs may have been the target:

“A statement by the joint army, federal and state anti-crime task force in Chihuahua state said suspect Ricardo Valles de la Rosa confessed to acting as a lookout in the shootings. It said he had been imprisoned in the United States and deported in 2007, after which he took up with the Barrio Azteca gang.

According to the statement:

An Azteca gang leader “ordered him by telephone some days before to locate the white sport utility vehicle in which Arthur Hancock Redelfs was traveling, which he did on March 13 at a children’s party.”

Valles de la Rosa told investigators that “when the sport utility vehicle left that spot, he advised other colleagues in the Aztecas, who ordered him to follow it.”

By the time Redelfs’ white SUV reached the scene where the attack occurred, Valles de la Rosa was told to back off, because the Aztecas — as the gang is known in Mexico — had the vehicle located. He said that moments later he heard gunfire, and saw the bullet-ridden vehicle with a dead man and woman inside.

The couple’s 7-month-old daughter was later found wailing in the back of the vehicle.

The statement did not specify whether Redelfs’ job at the jail in El Paso, across the border from Juarez, was the reason he was followed and shot. One theory was that the Aztecas — whose members operate and are incarcerated on both sides of the border — could have sought revenge against Redelfs for events inside the jail.”

The Mexican citizen who was killed — “Jorge Alberto Salcido, the husband of a Mexican employee of the consulate — may have been killed because he left the same party in a white SUV similar to the one in which Redelfs and his wife died.”

This story is consistent with last week’s report of a Department of Homeland Security alert that the Juarez Azteca gang may be trying to target El Paso law enforcement officers.