We may not know the truth about global warming but at least we know where 56 of the world’s major newspapers stand:

“Despite mounting evidence that key climate researchers were less than honest, and other indications that the science is not settled, tomorrow 56 newspapers will run a common front page editorial saying we have ‘Fourteen days to seal history’s judgment on this generation’.”

The editorial claims that “social justice” and “fairness” are the reasons why the world should support the Copenhagen climate change agenda. The newspapers even have a shared graphic: 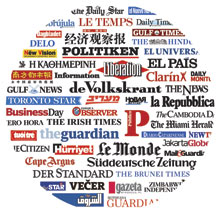 All they seem to lack is science.